Rendez-Vous 2017 Tall Ships Regatta: Celebrations at the Crew Parade and Prize-Giving Ceremony in Sines… and a Royal Message

It’s the second day of the Rendez-Vous 2017 Tall Ships Regatta in Sines and the sun is shining brightly. The clouds cleared in this friendly Portuguese port today (Saturday 29 April), ready for the colourful Crew Parade and prestigious Prize-Giving Ceremony at Sines Castle.

The first day of the Rendez-Vous 2017 Tall Ships Regatta in Sines was a huge success yesterday, with more than 11,000 visitors. Crowds of spectators flocked to this ordinarily sleepy city and the streets came alive with laughter and smiling faces of all ages.

Tonight, the captains and ships’ representatives are looking forward to celebrating in style at the Captains’ Dinner at Cais da Estação, while the trainees will be letting their hair down at the infamous Crew Party in Sines Castle.

This year, the Canadian Confederation is proud to celebrate its 150th anniversary. In fact, the Rendez-Vous 2017 Tall Ships Regatta has been organised to mark this monumental birthday. Check out #Canada150 on social media to find out more about the range of year-long festivities that are taking place… including this one!

We’re extremely pleased to announce that someone very special has supported and recognised these #Canada150 celebrations. None other than Her Royal Highness Queen Elizabeth II! Her Royal Highness has written a message of congratulations to the people of Québec, Canada, all the way from the UK.

At the first port of the Rendez-Vous 2017 Tall Ships Regatta, Royal Greenwich, the Leader of the Borough Council, Councillor Denise Hyland, presented the letter to the captain of Wylde Swan (The Netherlands), Jurgen Hanekom.

Earlier today (Friday 28 April), Tony van den Bos, captain of Wylde Swan (The Netherlands) passed on the letter to Adam Seager, captain of Jolie Brise (UK), who will sail with it to Las Palmas (48-hour stop-over)… and then take the plunge and plot a course across the Atlantic to Bermuda.

In Bermuda, the letter will be passed on… and again at every port until the fleet reaches Québec. Here, the four vessels that will complete the entire Rendez-Vous 2017 Tall Ships Regatta will be presented with a ceremonial copy of the letter. 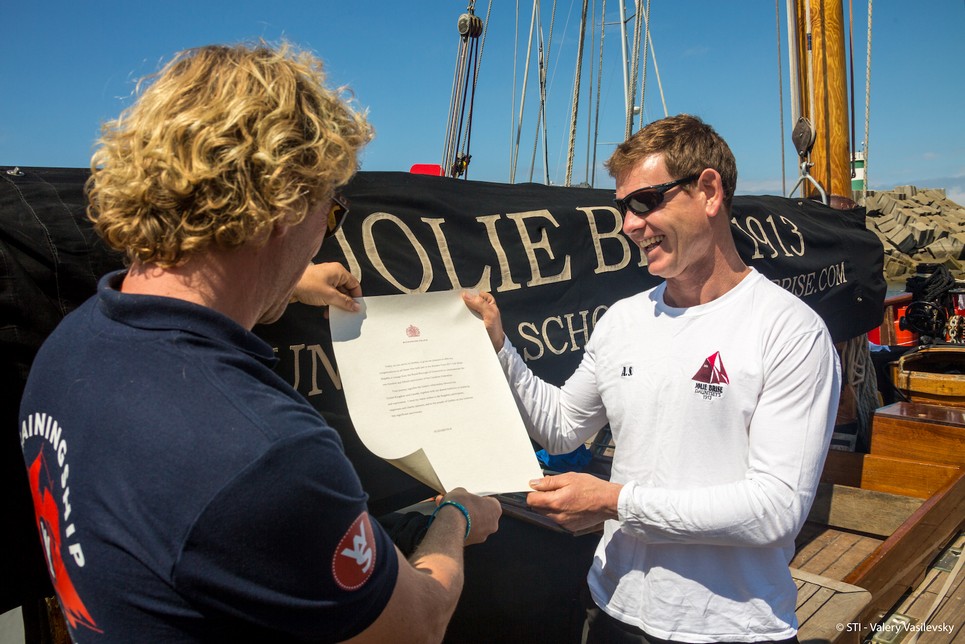 Here’s what the letter says:

“Today, as you arrive in Québec, it gives me pleasure to offer my congratulations to all those who took part in the Rendez-Vous 2017 Tall Ships Regatta, a voyage from the Royal Borough of Greenwich, to commemorate the one-hundred and fiftieth anniversary of the Canadian Confederation.

“Your journey signifies the historic relationship between the United Kingdom and Canada, together with our shared traditions of seafaring and exploration. I send my warm wishes to the Regatta’s participants, organisers and charity partners, and to the people of Québec, as you celebrate this significant anniversary.”

We’ll catch up with the letter in each port before Québec and share the incredible story of the final ceremony in the city. What a fantastic way to celebrate the 150th anniversary of the Canadian Confederation… and to promote international friendship and understanding.

Earlier this evening, crew members from each of the vessels in the Tall Ships fleet paraded through the port and city of Sines in style. Boasting bright and colourful fancy dress, playing musical instruments, singing at the top of their lungs, and proudly displaying their ship name boards, the trainees and crew members made their way toward the castle, for the ever popular Prize-Giving Ceremony.

Here are the well-deserved winners:

Most Musical Crew on the Crew Parade

Best Dressed in the Crew Parade, Class A

Wylde Swan (The Netherlands) – Presented by the Sines Port Committee.

3rd in Class A On Corrected Time

2nd in Class A On Corrected Time

1st in Class A on Corrected Time

About the Rendez-Vous 2017 Tall Ships Regatta

The Rendez-Vous 2017 Tall Ships Regatta is truly the adventure of a lifetime. You could be sailing in the wake of the great explorers, travelling 10,000 nautical miles, visiting seven different countries (UK, Portugal, Canary Islands, Bermuda, USA, Canada, and France), taking part in seven races… and cruising to more than 30 beautiful Canadian guest ports. What are you waiting for?

Want to get involved with the Rendez-Vous 2017 Tall Ships Regatta? There are still berths available – secure your place today! Check out our event page for more information. You can book your place directly with a participating vessel, or if you’d like help simply email our friendly team on enquiries@sailonboard.com who can make recommendations, answer questions and process your booking for you.