The race start conditions made it difficult for captains, and for the Race Committee to establish a sensible race start line. Nevertheless, the race started successfully and the fleet is now on its way to the final port of this Regatta.

The start line was easily viable from shore, which will have delighted the many people who turned out to watch. Making a remarkable start, the first vessel over the line was Royal Helena (Bulgaria), followed by Russian ships Kruzenshtern and then Mir. For the Class Bs and Cs, Akela (Russia) was first across the line in light winds.

“The wind started from the south-east, came right around to the north, and then back to the south-east in the course of two hours. Class A ships lined up to be well-positioned for a good start, before the wind went very light, some 30 minutes before the start. The Class A fleet all started closely together, making a glorious sight, with the sun shining on their sails and a backdrop of black storm clouds.”

“Royal Helena had a good start, but once over the line Mir closed in on her and with her much larger sail area, blanketed Royal Helena’s wind, leaving it difficult her to manoeuvre. In this close group, Nadezhda then closed in on both Royal Helena and Pogoria, which resulted in both captains deciding to put on the engines for a number of minutes to ensure safety at the start. That was approved by the Race Committee and allowed under the racing rules, which are there to ensure safety and good seamanship. The Race Committee will look at this particular scenario to decide whether they will add any time or deem it an unfair advantage. “

“It was a slow start for what will hopefully be a spectacular race. We hope for fair winds and good sailing conditions.” 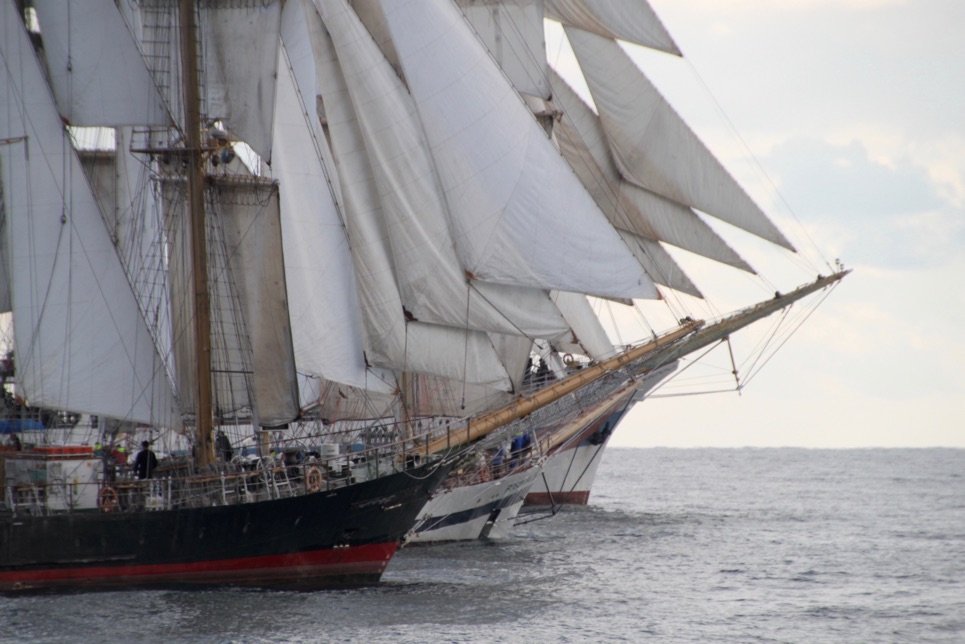 Class As crossed in the following order:

Line order for the combined Class B/C vessels:

Earlier in the day, the Parade of Sail, the traditional way the fleet say thank you for the host port’s hospitality, could be seen from Sochi’s northern beaches… and it was a terrific sight.

Vessels left the port and gathered in a holding area, approximately four miles away, parallel with the Matsesta river. Atyla (Vanuatu) then led the fleet northwards towards the VIP saluting vessel, which marked the end of the Parade of Sail, ahead of the race start at 16:00.

After Sochi, the international fleet will race across the Black Sea towards Varna, Bulgaria – the final port of the SCF Black Sea Tall Ships Regatta.

You can track the ships using the YB tracking system, a device carried by each vessel with live tracking updated every 15 minutes.

You can find out more about Sochi on our port page, and about the SCF Black Sea Tall Ships Regatta 2016 on our event page. Don’t forget to check out our blog for the latest from the event.

PAO Sovcomflot (SCF Group) is one of the world’s leading shipping companies, specialising in the transportation of crude oil, petroleum products, and liquefied gas, as well as servicing offshore upstream oil and gas installations and equipment.

The Group’s fleet comprises 148 vessels with a total deadweight of over 12.8 million tonnes. The company is registered in St Petersburg with offices in Moscow, Novorossiysk, Murmansk, Vladivostok, Yuzhno Sakhalinsk, London, Limassol, and Dubai.