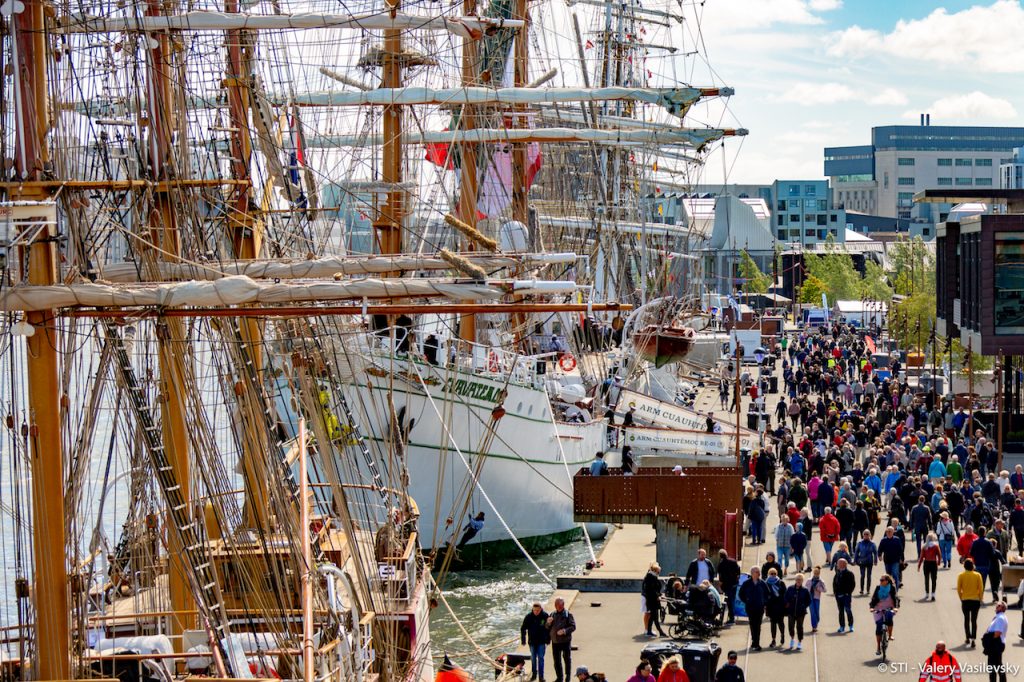 After years of careful planning an building anticipation, the Danish city of Aalborg got the Tall Ships Races 2019 off to the perfect start between 3-6 July…

A fleet of over 60 Tall Ships and Small Ships gathered in the port on the Limfjord for four days of maritime celebrations and spectacle. As the Tall Ships fleet, trainees and visitors came together in the spirit of international friendship and understanding, hundreds of thousands of visitors flocked to see the fleet, creating a unique and unparalleled electric atmosphere throughout the city.

To officially launch the celebrations, an Opening Ceremony was held at the main event stage of the event site. The Mayor of Aalborg, Thomas Kastrup-Larsen, and The Tall Ships Races 2019 Race Chairman, Knut Western, addressed the assembled crew members and spectators.

Race Chairman thanked the port of Aalborg for all of the hard work that has gone into creating what is sure to be an amazing experience for the Captains and Crews of the Tall Ships fleet.

“Today is not only the opening day of the Tall Ships event here in Aalborg, but also the opening of the Tall Ships Races 2019. This year is very special, we celebrate 20 years of collaboration between Aalborg and Sail Training International and we are delighted to bring a fleet of over 60 ships to Aalborg.

“I wish to thank the Aalborg host port organisation and all the volunteers who have worked hard to prepare for this great event and indeed still do. We are grateful, and appreciate what you have done to make the crews, especially the young trainees, feel welcome in Aalborg.

“We are looking forward to the four days in port, and we are convinced that Aalborg, with vast experience from previous visits of the Tall Ships fleet, will deliver another excellent event.”
Tall Ships Races 2019 Race Chairman, Knut Western

Mayor of Aalborg, Thomas Kastrup-Larsen, looked forward to some of the exciting programme ahead that will be sure to entertain the crews and spectators alike.

“I have been looking forward to this day tremendously… to welcome you all to the Tall Ships Races 2019. Now we have 4 days to come, with lots of entertainment, music and maritime experiences for the whole family.

“We have over 60 ships from all across the world, 70 concerts, and on Friday awaits the biggest fireworks in Denmark’s history. It is going to be a great celebration with great experiences to come.”

After over 70,000 visitors flocked to enjoy the spectacle of the Tall Ships, live music and entertainment on day one of the festivities, it was time to celebrate the Crews of these majestic ships with the traditional Crew Parade and Prize Giving Ceremony. Rainy weather wasn’t enough to dampen the spirits in and around the port and, after mustering at 1500 local time, the crews began their customary parade through Aalborg, creating a fantastic spectacle for the onlooking crowds.

With the Tall Ships fleet berthed on either side of the port of Aalborg, the parade route took the crews along both sides of the water where they met on the Limfjord bridge. From there they marched in unison to the main stage area where the prize winners were announced.

Highlights from the Crew Parade and Prize Giving Ceremony

On the third day in port, Aalborg continued their long standing tradition of entertaining spectators and crews alike with music, activities, celebrations and more. To mark the end of the festivities, the largest ever Danish fireworks display lit up the Limfjord bridge with over 3,000 kilos of pyrotechnics lighting up the Danish night sky. 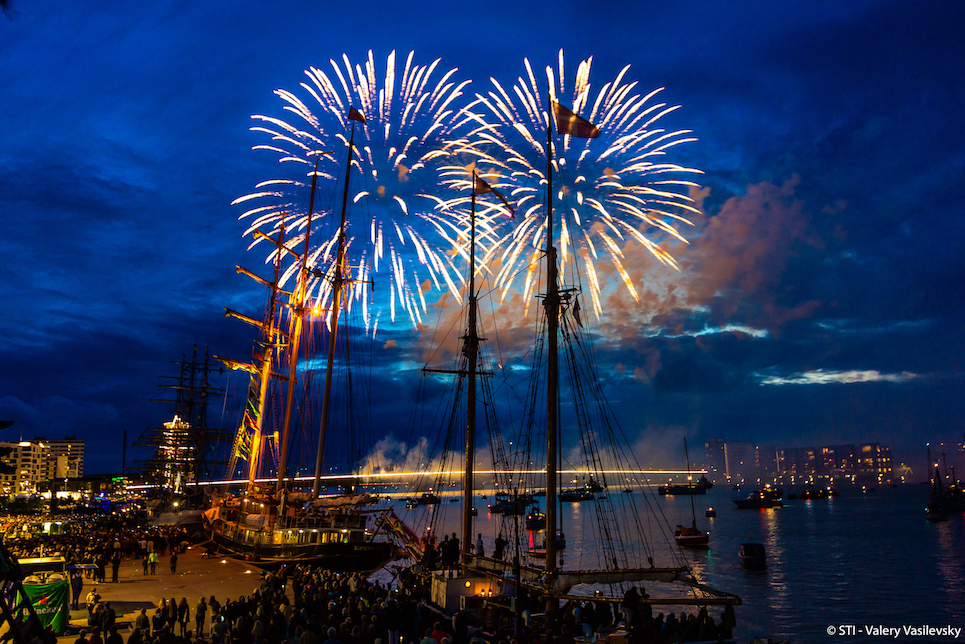 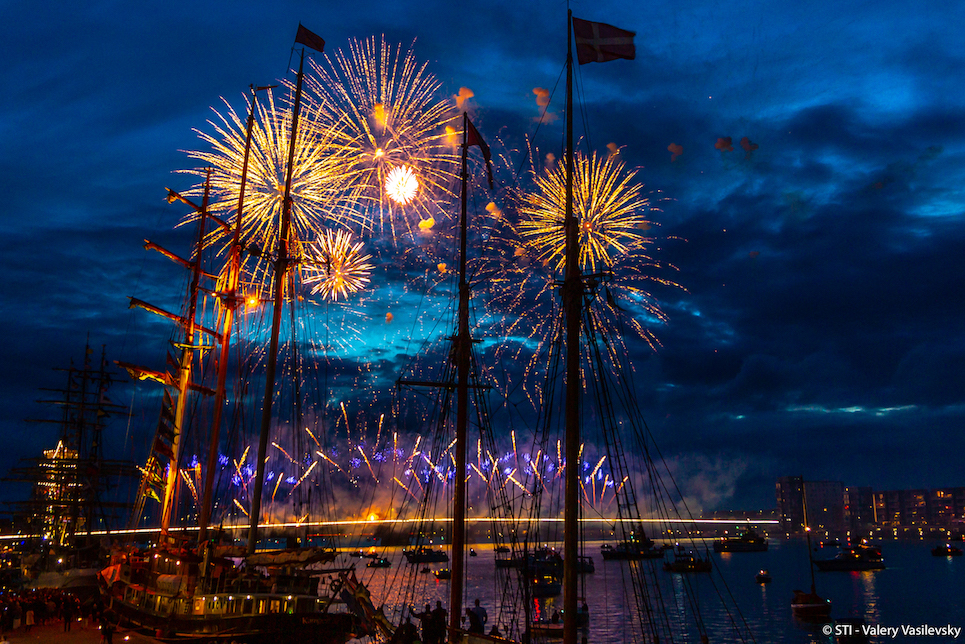 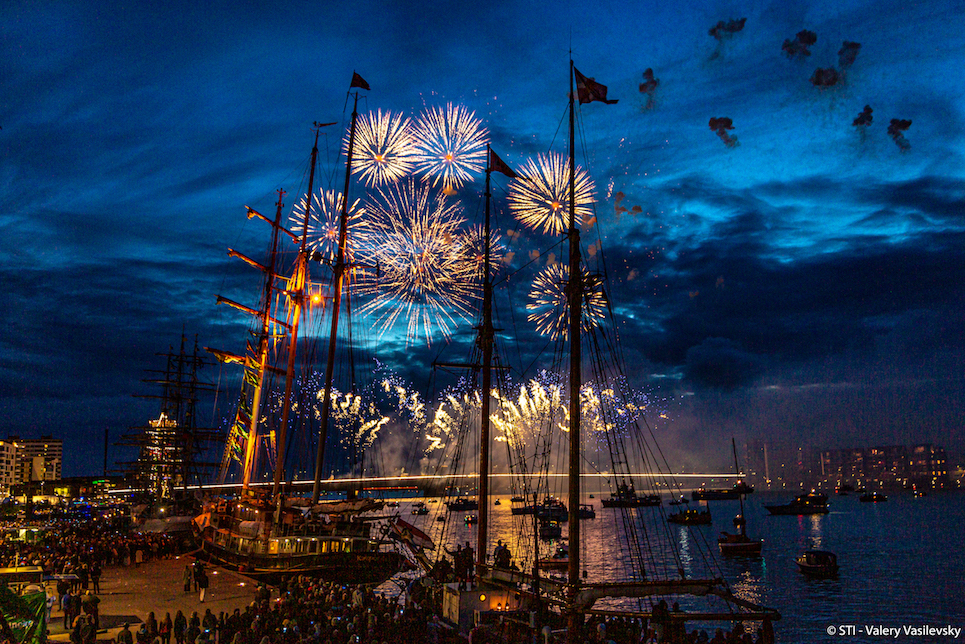 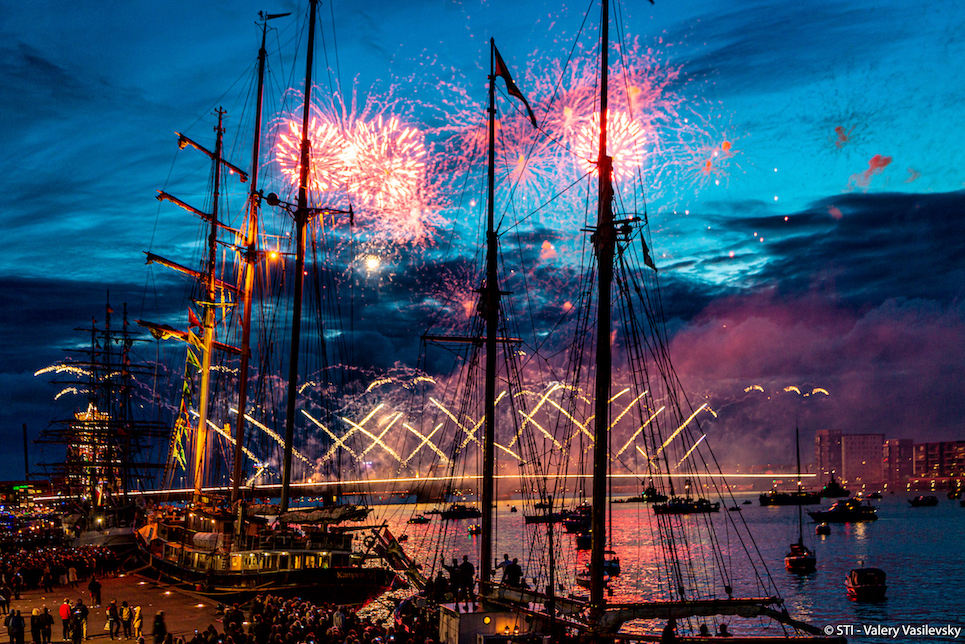 A Stunning Farewell and All Eyes on 2022

On the final day in port, all attention was focused on the Tall Ships and Small Ships Parade of Sail along the Limfjord and on to the start of Race One to Fredrikstad, Norway, where the Tall Ships Races 2019 will continue. Once again, spectators filled the port and lined the Limfjord bridge as the Tall Ships undocked and paraded in a show of appreciation for the Danish city for its brilliant hospitality.

To add an extra level of excitement and celebration, it was also announced that the port of Aalborg will welcome back the Tall Ships fleet as the final Host Port of the Tall Ships Races 2022. Sail Training International Chief Executive Officer, Gwyn Brown, and the Mayor of Aalborg, Thomas Kastrup-Larsen, held a press conference on board the Danish Tall Ship Maja to an assembled press pack.

This year, Europe’s largest, free, family festival is visiting north-west Europe during the summer, with a fleet of over 70 international Tall and Small Ships. The three-leg event sees vessels sailing from Aalborg, Denmark to Fredrikstad, Norway. Following this will be a stunning cruise-in-company along the coast of Norway to Bergen and a nail-biting race back to Aarhus, Denmark.