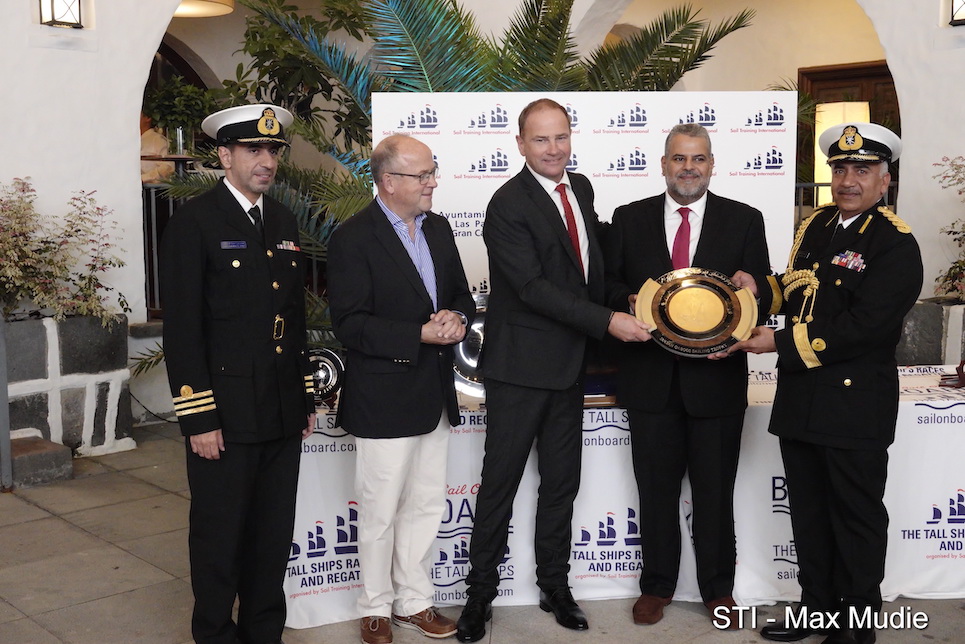 Awarded to the vessel that in the opinion of the Race Management Team, Volunteers Directors and Trustees, has shown great loyalty towards The Tall Ships Races over many years.

This award was presented to Esprit, a Class C Schooner from Germany.

Awarded to the vessel that in the opinion of the Race Management Team, Volunteers, Directors and Trustees has made the greatest contribution to The Tall Ships Races in their first year of participation.

Saeftinghe joined the Tall Ships Races for the first time in 2022, where she and her crew fully entered into the spirit of the Event. She also made an excellent contribution to all the in-port programmes and performed very well in the racing part of the overall event. Saeftinghe made a great addition to the fleet and we very much look forward to welcoming her to the Races again in the future.

Saeftinghe were not present at the conference, therefore a representative from STAB (Sail Training Association of Belgium), Dirk Gunst, collected the prize on their behalf.

Awarded to the Host Port which has recruited the largest number of trainees and made the greatest contribution to sail training this year.

Our return to The Tall Ships Races after the pandemic saw the added challenge of a smaller than usual fleet taking part in the race, which meant there were a limited number of trainee places available to the ports. Despite this, each of the host ports made a fantastic effort to overcome this challenge and they did a fantastic job in recruiting and placing as many trainees as possible.

For the first time, this year’s Host Port Trophy was awarded to all four ports of the Tall Ships Races 2022, as they all did a tremendous job in recruiting and placing a total of 479 trainees under unusual and challenging conditions.

Maggie Adamson has sailed as part of the crew of Swan since 2016. Since then she has worked on board as a volunteer, bosun, mate and in February 2022, she became full-time skipper.

Maggie received a number of impressive nominations for this year’s Sail Trainer of the Year award, including one from a trainee who said: “She naturally inspired and motivated our crew during our trip and made us all want to try our best for her and ourselves. The respect she showed us made us automatically respect her. I will forever be in awe of her talent and kindness.”

Sandra Laurenson from Tall Ships Shetland collected the award on behalf of Maggie who was not able to attend the conference.

Louise Kjøller Olsen is not just a fine sail trainer but is also a natural leader and organiser. She is currently a board member of her National Sail Training Organisation and a hardworking member of STI’s Youth Council. Louise has done a tremendous amount of work to promote her NSTO and Sail Training, both nationally and internationally. This is made all the more impressive to achieve as she works as a full-time professional quartermaster on board a Class A ship.

Over the years, Matilda Dagberg has developed extensive experience volunteering on a range of vessels for various sail training organisations. She is committed to, and has hugely contributed to, the Sail Training International Youth Council for the past six years, four of which in the role of Vice Chair.

As well as passionately fulfilling the roles and responsibilities of the positions she has held, she has constantly pushed for the Youth Council to be more ambitious and she has been instrumental in making the Youth Council the successful and proactive group it is today.

Since joining the Tall Ships Races 25 years ago as a vessel inspector after retiring as a skipper, Harry Allaway has continued to volunteer for the organization and has supported Sail Training International in many different ways: as vessel inspector, communications officer, assistant race chair, IT consultant, red brick specialist, friend and so much more.

Harry is kind, generous, humble, funny, patient and is devoted to our missions of youth development and international friendship and understanding. He has friends in every host port and always receives a warm welcome on board every ship.

Klaas Gaastra has been a part of Bark Europa‘s family since the very beginning. Klaas has steered her across oceans to many destinations all over the world, playing a big part in making her the kind of ship she is now and laying the foundations for all that she stands for.

Bark Europa started operating in the nineties with a Dutch voyage crew of approximately 10 guests. Today she welcomes many guests on board of different nationalities and backgrounds.

With the broadest variety of interests and knowledge ranging from history, celestial navigation, wildlife and so much more, it is a privilege for all those on board to listen to his many stories, which we hope he will continue to tell for many years to come.

Europa’s family always knew that one day the time would come when he might not sail her across the oceans anymore, but it’s a huge loss now that this moment is here. They and we are so glad he will stay involved in everything the ship does does, perhaps not by steering the ship at sea, but by keeping her on the right course from land.

The Royal Navy of Oman (RNO) are old friends of Sail Training International, and for many years now Shabab Oman has been a popular participant in the Tall Ships Races. In addition, over the last six years RNO has donated €300,000 to help disadvantaged young people take part in our events through the Sultanate of Oman Bursary Fund.

In 2018, Christian Radich set up a dedicated program to help deal with a very high dropout rate in upper secondary education in their country.  Their objective with was to help these young people and to help combat the negative impact the situation was having on the individuals themselves, their families and society at large.

The Windjammer Program combines a month-long training voyage on board the Class A Christian Radich plus 10 days of onshore workshops.

As part of the program the young people are also offered invaluable insights into work opportunities on board by attending “job teaser” courses with the ship’s carpenter, doctor, mechanic, and navigator.

As a result of this program, an impressive 60% of the 300 participants who completed the program have successfully got their lives back on track, which is a truly impressive result.

Awarded to the person who has made an outstanding contribution to international understanding and friendship through sail training.

It all started in 1994 with Vladimir Martus’ vision and determination to build a replica frigate which Peter the Great had decreed to build originally in 1703 as the first of Russia’s fleet in the Baltic.

Vladimir has been part Sail Training Family since 1994 and since the very beginning of Shtandart’s life, he has been devoted to the sail training mission for young people.

Shtandart first entered the Tall Ships Races in 2001 and has been a regular and much valued participant ever since.

As a result of Vladimir’s open opposition to Mr Putin’s regime, Vladimir and his St Petersburg registered ship were forced to leave Russia ten years ago. Since then, he has continued to condemn the regime and has been forced to sail outside his ship’s territorial waters.

Shtandardt has always welcomed trainees and crew of all nationalities and backgrounds. Vladimir himself is half Ukranian and half Russian and has always enjoyed having trainees from both Russia and Ukraine on board, as well as from many other nationalities.

When Russian began its invasion of Ukraine earlier this year, as a Russian flagged vessel, Shtandardt suddenly found that not only she was not welcome in Russia, but European harbours were now also denying her entrance.

As the organisers of the Tall Ships Races 2022 and as laws were decreed in all European countries banning entry to Russian Flagged vessels, we were forced to inform Vladimir that he would not be able to participate in this year’s Event.

Vladimir reminded us of the importance of our mission of international friendship and understanding and of the power of communication between all nations to avoid conflict.

We have been humbled to follow how, despite all the obstacles he has encountered over the last year, Vladimir has never stopped striving for a better world, where common understanding and acceptance is the most powerful tool against conflict.  He continues to work relentlessly to ensure that Shtandart is able to continue to operate and able to pursue the mission which is at the core of everything she does. This is by no means an easy task, but against all the odds, he is still as determined as ever.