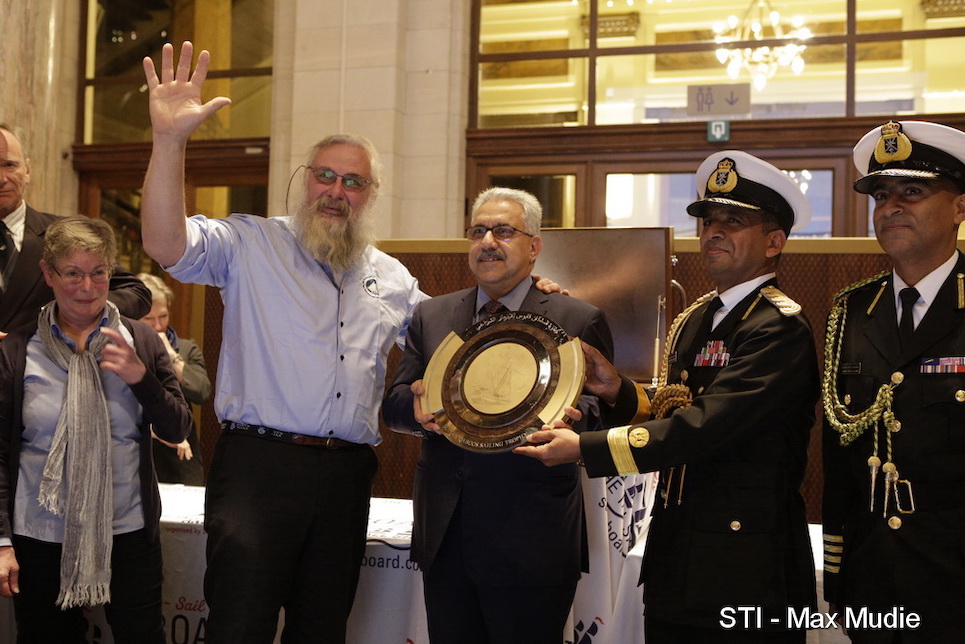 Awarded to the ship which, at any time between 1 October and 30 September, covers the greatest distance in any period of 124 hours, which is 5 days and 4 hours with a sail training crew on board.

This year the Boston Teapot Trophy has been awarded to the Polish Class A Tall Ship, Fryderyk Chopin after sailing 1,218 nautical miles. The story of the Boston Teapot started in 1964, after a transatlantic Tall Ships’ Race to America. Two vessels were sailing back from Boston to Europe, and one of them would benefit financially from their sponsors if she were taking part in a race, or other competition.

Awarded to the vessel that in the opinion of the Race Management Team, Volunteers, Directors and Trustees has made the greatest contribution to The Tall Ships Races in their first year of participation.

Koalicja joined the Tall Ships Races for the first time in 2019 from Poland. Her owners had previously taken part in the race series and decided to enter their own vessel following the success of their Sail Training programmes. The Tall Ships Races 2019 were a huge success for the yacht which finished first in Race One. They hope this success will mark the start of a long and happy association with the event.

Awarded to the vessel that in the opinion of the Race Management Team, Volunteers Directors and Trustees, has shown great loyalty towards The Tall Ships Races over many years.

This award was presented to Juan de Lángara, a Class C BM Schooner from Spain. After the Cutty Sark Tall Ships’ Races in 1990, a group of liaison officers who were all sailors, were so taken with the philosophy of the races and the sail training experience they decided to charter a boat themselves for the races in 1996.

Motivated by the ideals of sail training in 1999 decided to buy their own boat so that they could regularly race in The Tall Ships’ Races and have made a terrific contribution in the races ever since.

Captain Marcus Seidl is one of the most highly respected and one of the most experienced captains in the Tall Ships fleet. He started his career as a cadet in the early 1980s on board Statsraad Lehmkuhl. Some 5 years later he took command and 2019 marks 25 continuous years as captain of one of the most impressive square-riggers in the world where he has been able to help countless young people through the Sail Training experience.

Mads Kamstrup saw an advertisement in his local library in 2013 and decided to apply for a trainee place on The Tall Ships Races from Bergen to Esbjerg in 2014. The experience that summer on Gulden Leeuw (Netherlands) totally overwhelmed him and he decided to do more sailing the next summer. Sailing as a trainee on a tall ship soon got into his blood, and he has since sailed with seven different vessels all over the world including Loa (Denmark), Thalassa (Netherlands), Swan (UK), Fryderyk Chopin (Poland), and both Windeward Bound (Australia) and Rhona H (Australia) in Hobart, Tasmania.

Noëlle was a very young teacher when she stepped on board Morgenster (Netherlands) seven years ago. She teaches in a school in Charleroi, Belgium, for children with behaviour difficulties. As a sail trainer she approaches the trainees with pure positivity and a very smart attention management. She is a great inspiration to the crew and captain on every voyage she takes part on.

Awarded to a sail training volunteer under 25 to encourage high-performing individuals who deliver sail training to young people.

Cody first got the opportunity to experience Sail Training when he sailed on STS Leeuwin II (Australia) in 2017. He raised the funds for the voyage single handedly through part time work and he quickly became a key volunteer with the organisation running the vessel. He displays a strong passion for Sail Training and gives as much as possible to every voyage he takes part in.

Awarded to a sail training organisation, operating smaller vessels, that demonstrates excellence in “innovation” and “best practice” in sail training for young people.

Challenge Wales (UK) vessel works with a diverse mix of young people with chaotic lifestyles. In 2019 the charity worked with no fewer than 360 young people, with 90% being classed as disadvantaged. They have helped young people from a range of backgrounds including; those at risk of exclusion from education, care givers, those who are homeless or at risk of being homeless, young people with a learning disability and more. 10% of beneficiaries are in education or employment, undertaking their Duke of Edinburgh Award or those simply wanting to have a go and do something different. There is no doubt that this organisation does some inspirational work on board with hard-to-reach individuals.

Awarded to a sail training organisation, operating larger vessels, that demonstrates excellence in “innovation” and “best practice” in sail training for young people.

This Class A ship is the first military Tall Ships to be awarded Sail Training Organisation of the Year. Capitan Miranda (Uruguay) has participated in numerous Tall Ships Races and Regattas and has provided a fantastic programme in personal and professional development around the world. The vessel has been championed worldwide for the effectiveness of its training in development, key skills, leadership and more that is open to both civilians and those serving in the Navy.

Awarded to the Host Port which has recruited the largest number of trainees made the greatest contribution to sail training this year.

The Tall Ships Races 2019 host ports once again did a great job recruiting a large number of trainees. The winning port, Fredrikstad, had an excellent trainee recruitment campaign that provided 162 young people from all backgrounds, to experience the exciting adventure of being a crew on a Tall Ship.

Manfred has sailed all of his life, starting as a keen yachtsman before completing his Masters Certificate. He succeeded Captain Hans Engel in 1980 as the representative of Sail Training Association for Germany and he founded the overall organising body for Sail Training in Germany, STA Germany in 1984. Known as the father of Alexander von Humboldt (Germany), his passion, vision and dedication were crucial to the successful building and launching of Alexander von Humboldt II.

Awarded to the person who has made an outstanding contribution to international understanding and friendship through sail training.

Over the last 30 years, Patrick has headed one of the largest maritime festivals in the world, Armada Rouen, and has made an amazing contribution to international friendship and understanding. His fierce dedication has led to him being awarded with France’s highest honours; Officer of the Order of Merit, Knight of the National Order of Merit, Knight of the Légion d’honneur and Officer of the Légion d’honneur.

The Royal Navy of Oman (RNO) are old friends of Sail Training International, and for many years now Shabab Oman has been a popular participant in the Tall Ships Races. In addition, over the last six years RNO has donated €300,000 to help disadvantaged young people take part in our events through the Sultanate of Oman Bursary Fund.

Rupel (Belgium) was built in 1996 by unemployed young people during a time of severe economic struggle in the 90’s.The objective of this project was to provide these young people with the necessary skills that would help them find jobs more easily. Since then, the ship has been a regular participant in the Tall Ships Races.

The focus of the organisation is the social and educational goals that the ship has stood for since its construction. The ship offers voyages with disadvantaged youth and therapeutic trips for people suffering from mental or physical disabilities. Individuals are encouraged to partake in team building activities on the Rupel to improve their self-confidence and lift the group spirit of these young people.

She is maintained by a team of dedicated unpaid volunteers that take care of the maintenance and professional management of the ship. The organisation stimulates ownership, teamwork & responsibility based on confidence in the abilities and personality of every young person which often leads to employment.The greatest quality of the ship is the team of people who are a close-knit and warm group of friends, sharing similar qualities and a true passion for sailing.