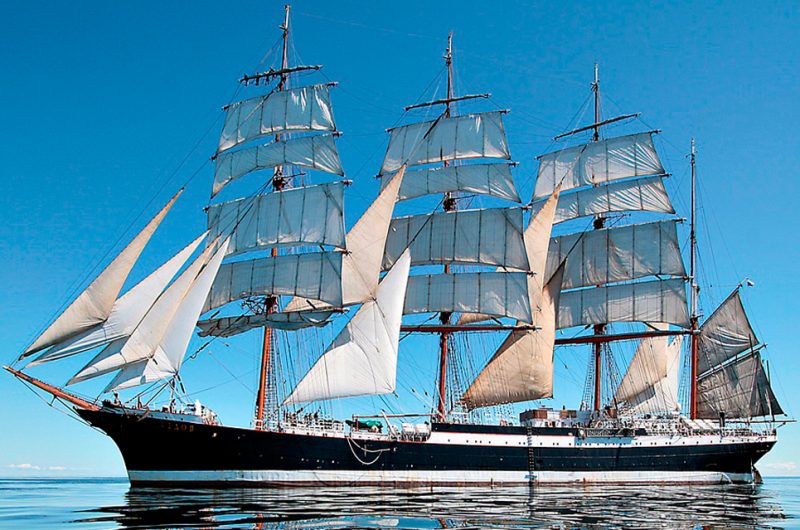 The four masted sail training barque of the University of Murmansk, Sedov, is the vessel on which the young cadets of the university train to become officers, mechanics and radio specialists.

Sedov can accommodate up to 320 people on board among which 75 are crew members, 100 to 120 cadets and in some years, as many as 45 trainees of any nationality to discover life aboard a tall ship. This training takes place during a journey of 3 to 4 months along European coasts and will take advantage of cultural and economic exchanges with the ports.

Launched in Kiel in 1921 at the shipbuilding yard Krupp, Sedov (then named Magdalene Vinnen) with an auxiliary diesel engine with some 128hp, was exclusively dedicated to the transport of goods and the crew were already partially made up of cadets.

In 1936, Magdalene Vinnen was sold to Norddeutscher Lloyd, Bremen and was renamed Kommodore Johnsen. She carried out numerous circumnavigations, transporting some wheat, some coal and some cereals.

The Second World War put an end to these journeys as an ocean-going vessel, but she continued to train cadets in the Baltic where her journeys lasted from 5 to 6 weeks. During this time of scarcity of fuel, she would sail only. She came under Russian state ownership after the surrender of Germany.

The four masted barque was then renamed “Sedov” after the polar explorer Georgij Sedov who died during an investigation in the Arctic in 1914. Sedov navigated as an oceanographical vessel until 1966, she was then put in reserve to Kronstadt and she reappeared in the 1970’s.

Between the 1970’s and 1981 various works were carried out which cost in the region of 1 million roubles. She left the shipyard in 1981 and, with Riga as the port of registry, she embarked henceforth cadets from schools of navigation of Kalingrad and Murmansk.

The fall of the Wall in 1989 and the Proclamation of Independence of Latvia in 1991 influenced the fate of Sedov. Living in the lap of Russia, she left Riga for Murmansk, her new port of registry, and fell henceforth to the school of the navy of the city which assured her management and maintenance.

As a sail training vessel, Sedov allows the forming of 110 to 120 cadets all from the universities of Murmansk, St Petersburg and Arhangelsk. She participates regularly in the big maritime international events as a privileged host and has been a regular participant in the Tall Ships’ Races.