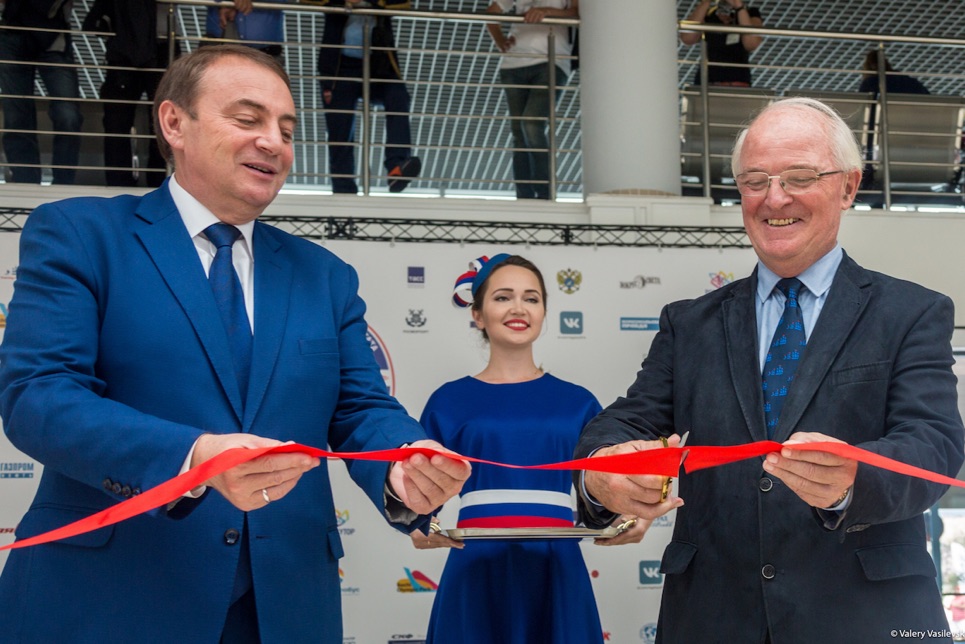 The international fleet of Tall and Small Ships has

arrived in Russia’ largest resort city Sochi – the third and

the early thunderstorms cleared, festivities kicked off in the port

cadets, crew members and visitors with open arms and spirited

The vessels have just completed Race 2 of the SCF

Black Sea Tall Ships Regatta 2016 from Novorossisyk to Sochi, and they

crew members to join in the festivities.

first place finish in Race 1. She was then followed by the rest of the

fleet, which moored up alongside in Sochi Grand Marina.

We’re currently waiting for confirmation of the results of Race 2, which we’ll post later today. Keep checking back.

atmosphere in Sochi is electricäó_ and not just because of the storms.

The city is pulsing with a feeling of excitement and anticipation, ahead

of the next four days which are packed full of activities and events.

The event coincides with

celebrations for the Diamond Anniversary of the first Tall Ships Race

in 1956 – Soviet and Russian Tall Ships have been participating since

1978. But that isn’t the only anniversaryäó_ Nadezhda (Russia) is celebrating her 25th anniversary and Kruzenshtern (Russia) is proud to commemorate her 90th!

port opened its gates to the public earlier today, ahead of the

official Opening Ceremony at 13:00. A brass band provided a rousing

ceremonial introduction to the speakers: the Mayor of Sochi, Anatoliy

Tonkovidov. The ceremony provided a warm welcome to this beautiful city

for the trainees, cadets, crews and spectators and kicked the event off

äóìToday, we are back in Sochi with the Tall

Ships fleet. Why are we coming back? The answer to this question is very

simple. We know that the people in Sochi love the sea, love sailing

äóìWe have been organising the Tall Ships

Races and Regattas for 60 years. And why do we do this? Because we want

to bring, especially, young people together on board sailing ships

because we strongly believe that this experience will make them better

äóìWe also want to bring people together from different

Amongst the ships in the Tall Ships fleet, we have ships from Poland,

Spain, Romania, Bulgaria, and Russia here today. On board, there are

crew members from 15 different nations. And this is how we bring out

the Tall Ships, I would like to thank the Mayor of Sochi for the great

hospitality and the great contribution to the eventäó_ Mr Anatoliy