N.B This article was published before the announcement that Turku, Finland, would be the second host port of the Tall Ships Races 2021. You can read the full announcement regarding Turku here.

To celebrate the 65th year of the Tall Ships Races and Regattas, we’re delighted to announce our return to the Baltic Sea. Between 27 June and 3 August 2021, the international Tall Ships fleet will visit five countries for a series of races and spectacular maritime celebrations.

The Tall Ships Races 2021 will take the majestic Tall Ships fleet back to the Baltic Sea for the first time since 2017. During our last visit, over four million visitors came to see the Tall Ships, and we’re sure that 2021 will be just as successful.

The event will start on Sunday 27 June and continue through until Tuesday 3 August with three fantastic races and a Cruise-in-Company. The race series will take the Tall Ships to five different ports across five countries – Klaipeda, Lithuania, Turku, Finland, Tallinn, Estonia, Mariehamn, Åland Islands and Szczecin, Poland. 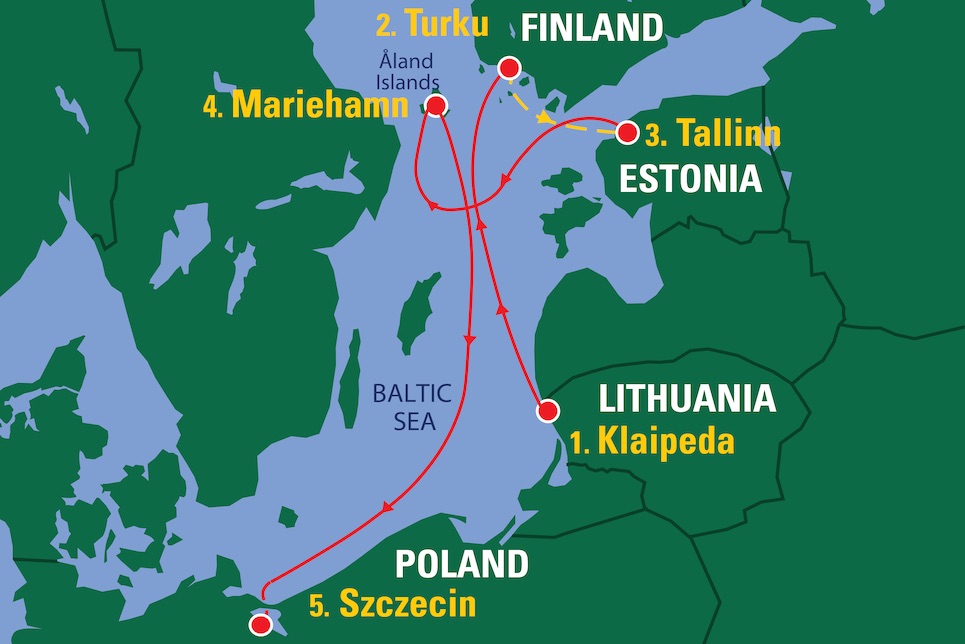 Head of Race Directorate, Paul Bishop, provided a few details about what can be expected during the different race legs of the event.

“The Tall Ships Races 2021 offers a total of around 1,500 nautical miles of racing in the Baltic Sea. This region has been a popular sea area with Tall Ships from around the world, with up to 100 vessels taking part in previous Baltic race series.

“Race One will start in Klaipeda and finish off the coast of Estonia before transiting into the beautiful port of Turku. A Cruise-in-Company will then follow amongst the beautiful Finnish archipelago to the Hanseatic port of Tallinn. This will be the first time since Tallinn has hosted The Tall Ships Races since 1992.

“Race Two will take the fleet around a series of challenging waypoints before finishing in Mariehamn which is steeped in maritime heritage. Race Three will be the longest race leg south to Szczecin, the final host port in the race series.

“We hope that The Tall Ships Races 2021 will be an attractive route for the many vessels operators that regularly support our Baltic race series, and will offer exciting and adventurous opportunities for the thousands of young trainees that we expect to take part.”

“This is exceptionally good news to Klaipeda. We are glad that Klaipeda has met the expectations of the international community and proved that we can welcome huge international events and create a fantastic festival for hundreds of thousands of people.

“I believe that the summer of 2021, once again offering a unique opportunity to see the Tall Ships and admire their beauty, will create unforgettable moments both to the city community and all the guests visiting our only port city.”
Mayor of Klaipeda, Vytautas Grubliauskas

Turku is situated on the banks of the River Aura, and was previously the capital of Finland. The vessels will travel on a spectacular route through the archipelago, before arriving right in the middle of the city. The Tall Ships Races 2021 will mark the 25th anniversary of the first time the city welcome the Tall Ships to its heart.

Located in Åland, an autonomous collection of islands at the entrance to the Gulf of Bothnia, the town of Mariehamn is no stranger to Tall Ships events. It’s rich maritime history is married with a warm and welcoming nature from its 11,000 inhabitants and visitors can expect a relaxed and picturesque town to explore some of the best nature the Baltic region has to offer.

“We are honoured that we can welcome the Tall Ships Races 2021 to Mariehamn, once the home port of the world´s last fleet of commercial windjammers. Our main focus is to make the visit a positive experience. We will produce an event that everybody will remember with joy and appreciation!”

This fantastic race series will offer a wide range of festivities, attractions and crew activities during Europe’s largest, free, family festival. All of which is sure to make the 65th instalment of the Tall Ships Races event a truly unforgettable experience.

We aren’t open for ship entries yet, but this is an event to put into your forward plan or bucket list and start saving up for!