The Tall Ships Races 2016 A Coruña: Crew Members Let Down Their Hair

Last night (Friday 12 August) crew members let down their hair in style at the Crew Party in the final port of the Tall Ships Races 2016, A Coruña.

Trainees from different nationalities on board all vessels were invited to attend a big party at the PALEXCO, with a DJ providing the evening’s entertainment.

Tales from the Trainees

We caught up with trainees who sailed in Race Three and the Cruise-in-Company from Cádiz to A Coruña on board Class A Tall Ship, Morgenster (Netherlands). We asked them a few questions before they set sail, then asked them what it was like when they got back. This is what they said: 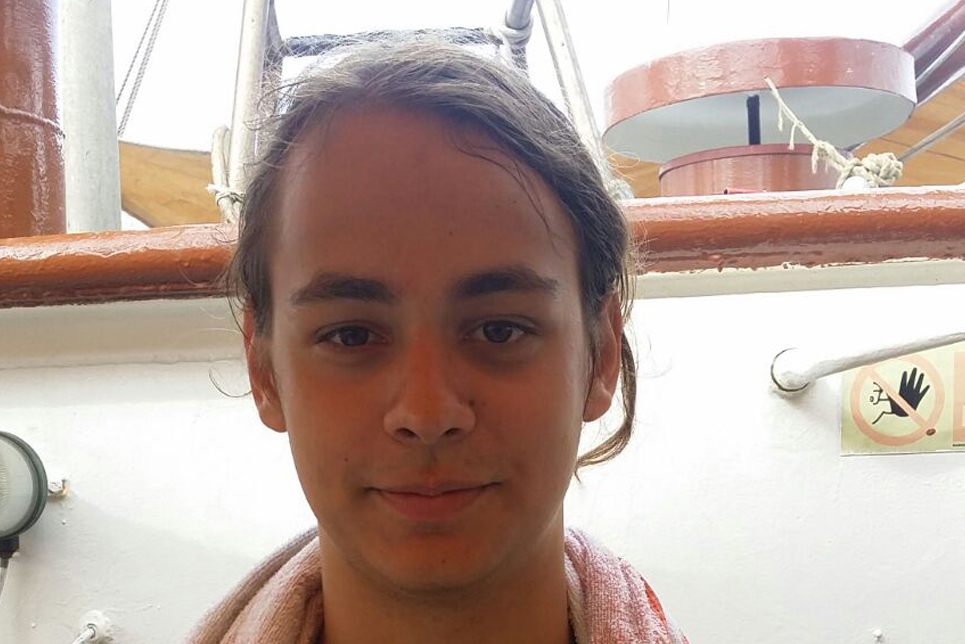 Gabriel Barrios, 17, on board Morgenster (The Netherlands).

Have you sailed before? Yes

Why did you apply to become a trainee? Because I wanted to experience sailing on a big sailboat and the cultural exchange.

How do you feel about the challenge of sailing to Cádiz? At the beginning rather gloomy but now very comfortable

What are you most looking forward to? Enjoying the sea, learning how it all works and the discipline. The views out to sea especially at sunset.

So – what was the voyage to A Coruña like? It was not what I expected – it was much better! You cannot really describe the experience – basically living with 50 different people you don’t know. By the end, they’re like family and you can rely on them for anything. I expected more physical exercise, but what I found out was it was more mental work – like at night, on look out and steering the wheel. I could see some people breaking down when they were tired. It tested their limits, which is good, because on land I never tested those boundaries. I’ve never woken up at 4am six days in a row! I never knew I had that willpower, 24 hours per day. You are doing something all the time.

What was your favourite part of the adventure? The food – the food was very nice! The little rituals we had, like waking up in the morning and preparing breakfast for the next watch. And the stars! The views were amazing!

What was the food like? What was your favourite meal? The meals changed every day. The fish soup was the best – and I don’t really like seafood. But it was amazing. The food really lifted your spirit.

What was your least favourite part of the adventure? Dealing with people who weren’t willing to/didn’t have the spirit of the ship – like when we had watches and people went into the warm part of the ship to make coffee, but stayed there. There were others who were seasick but stayed on watch because they were part of the team.

What was the most valuable lesson you learned on board? To trust people, I think. I kind of have more faith in humanity now – I know even strangers can impress you in ways. It’s strange, I feel really familiar with them now.

What would you say to someone thinking of taking part in sail training? Bring warm clothes, maybe. Think – is that is what you really want to do? I was OK with cleaning toilets and everything, but not everyone was. Any type of person can do this and enjoy it – it’s just a matter of getting out of your comfort zone. Everyone is very nice. The crew can be very direct; they don’t sugar-coat anything, but at the end of the day it’s because they care about you – when you realise that it’s a really nice feeling.

Inés Sanguino, 20, on board Morgenster (The Netherlands).

Have you sailed before? No, never.

Why did you apply? I have some rules. I mean, every single summer I have to do some things I’ve planned on a list before. So I was looking for a trip where I don’t know anyone and something useful for my life. Sailing seemed the best option!

How do you feel about the challenge of sailing to Cádiz? Now I’m quite relaxed. I just hope I will be like today during the rest of the journey.

What are you most looking forward to? Meeting new people and adrenaline for the body. Also, I want to improve my languages. I’ve already met a French teacher on board! The sensation of being in a group, working together, sharing new experiences. It will be amazing.

What are you least looking forward to? Nothing.

So – what was the voyage to A Coruña like? It was great! I met different people, did things different. In the end it’s like adopting a new style of life which is refreshing, so it was cool.

What was your favourite part of the adventure? When everyone stopped feeling seasick and the atmosphere got better and the team started to work. And the Cruise-in-Company was pretty good.

What was the food like? What was your favourite meal? It was really good, which surprised me. And then we had the country dinners, which let us know more about their traditions. My favourite was the Norwegian fish soup, because I’ve never tried it before and it was good.

What was the most valuable lesson you learned on board? Hard work and to get down to earth and away from all the academic stuff, and intellectual lives, which I needed.

What would you say to someone thinking of taking part in sail training? Go for it! And even more if you haven’t sailed before.

You can find out more about taking part in a Tall Ships adventure by visiting sailonboard.com.