The first vessel to cross the finish line of Race 5 – the final Transatlantic crossing of the Rendez-Vous 2017 Tall Ships Regatta – is expected today. And our crews report mixed emotions about returning home and rough conditions at sea.

“After 2,000 nautical miles of hard-fought ocean racing Peter von Danzig is set to take line honours this evening having led the Rendez-Vous 2017 Tall Ships Regatta fleet since the race start off Halifax 17 days ago. Rona II and Spaniel have been pushing her hard all the way and are expected to cross the line second and third place respectively.

“The battle for the first Class A ship to cross the finish line intensifies with Gulden Leeuw making big gains on her rival Oosterschelde during the past 24 hours. She is now just a few miles behind with 240 miles to go. The Class A finish could be very close as they are expected to close in on the finish line off the Eddystone lighthouse tomorrow night.

“Oosterschelde remains first on corrected time at present but Blue Clipper and Jolie Brise are still in contention for this prestigious place. As predicted, the final race leg has shaped up to be an epic finish to the Rendez-Vous 2017 Tall Ships Regatta.”

PositionS overall and by class – on corrected time:

14 August: As of now we are somewhere past the halfway mark of our journey, around 30º west of Greenwich. Approximately in the same distance from Europe, America, the Azores and Iceland, we are literally in the middle of nowhere. However, there hasn’t been a single day without sea birds flying alongside Gulden Leeuw.

At first we were sure that the birds were just there from Newfoundland, and they would stop appearing soon. They didn’t though, and by now they are more likely to be European birds than Canadian. Those birds in the middle of the Atlantic Ocean are our closest connection to the shore right now. A famous Polish shantyman Andrzej Korycki sings about seagulls:

For the sailors returning from the seas, You bring home close to their memories

This is how we are feeling about the sea birds right now. The dolphins bring us joy, the whales – wonder; but only the birds, still here after so many miles travelled (1,770 as of this morning!) make us actually think of home.

There is a very special mood on board these days. On the one hand, everyone gets homesick and longs for at least a short conversation with their loved ones. On the other hand, we have become really close and the ship is now also our home. The home we do not want to leave behind.

But leave we will, and way too soon. We will take with us the experiences and lessons learned on board. We will take pictures and journals and memories, which we will share with our families and friends. But the feeling of sailing across the Atlantic will forever be ours alone, impossible to describe to those who haven’t lived it. 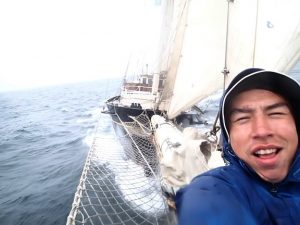 Live from the Atlantic – Gulden Leeuw

15 August: As of late the Gulden Leeuw has been a race car on the ocean. We’re supposed to cross the finish line in three days. When home once seemed so far away, the farther we reach, the closer it seems to be around the corner. Our short time left on the boat is a reminder to appreciate the days coming and the days that have past. With laughs shared, memories made, and friends that only seem to come around once in a lifetime, we hang our heads as it has to end, but cheer and laugh as the days continue.

The warm winds of Africa and Portugal embraced us as we reefed our first sail. It was a gentle reminder of how close we are, but more importantly how far we’ve come. With the switching of the watch times again on the horizon, I look forward to the mornings of saying goodbye to the stars of every oceans night and hello to the next day’s sun. For the family and friends missing loved ones on the ship, the sun that lights our path, and the moon that we look up to, is the same one we see every night at home. We aren’t so far away, and we’ll be there again, soon.

And to all the mothers, fathers, grandparents and all our relations, we think of you every day, and you keep us moving forward when we question our strength. We miss you. Personally to my mom, my sister is doing good and she’s making me an awfully proud brother.

16 August: Yesterday we learned how to sail in stormy weather and what to do in the event of a ripped sail, or two.The storm was one of the most exciting parts of the day which also caused two sails to rip; the fore stay sail and flying jib. The wind was so strong that it ripped the two sails in half all on its own. It was very cold and wet, and everyone was feeling sea sick and catching colds because of the way the ship was rocking, and the weather. We started using harnesses when it started heeling more and when the waves got bigger. It was scary because the ship was tilted to the side and the winds and rain would have made it easy for someone to fall overboard. Because of all that we only had half of a happy hour. We had to make everything including the bunks, sea tight. Cups and plates were smashing and everything was flying in the galley – yet we still managed to get nice food. People were falling all over the place. It was hectic.

Sail and get wet: Rona II

16 August: You know that feeling where you’re trying to go to sleep but a trickle of water is falling on your head? That feeling where your bed leans back and forth at angles of up to thirty degrees, and every tilt brings a fresh gush of water onto your sleeping bag with the volume and intensity of a small power shower? When you are on your bunk one moment and one metre above it the next? That simultaneously funny and sickening moment when a crack team of soggy sailors rush into your bedroom to pump out the ever-increasing tide of seawater under your bunk? No? Come sail with the Rona Sailing Project, and all this could be yours.

We have finally reached that long-awaited stage of the voyage where the helmsman and lookouts must wear ski goggles to see through the spray, the widely agreed marker for the apogee of excitement in any sailing trip. Last night we encountered winds of up to gale force nine, building until midnight. Luminescence made this moment all the more memorable and the regular waterfalls of spray crashing over the cockpit brought with them beautiful sparks which stuck to our waterproofs, reminding us of a light show. All three guard rails were submerged in the sea at times, and the skipper at the helm was repeatedly knocked down by the force of the spray (but got up again immediately every time). The watch sat in the cockpit did not sit on the bench on the low side, but rather stood on it, with their backs resting against the bench on the high side, such was the angle of the boat .The opening of the first storm box was fully justified, and was rewarded by handfuls of Cliff Bars and protein snacks to fuel the watch on deck. In spite of these trying conditions, though, the crew’s smiles are as wide as ever. After all, it wouldn’t be a proper Atlantic crossing without a healthy dose of storm.

Skippers Comment: Yep, it was “a bit full on” last night ….