We recently spoke to Eline Kristiansen, Norway’s representative in the Sail Training International Youth Council, about a new scholarship she has set up to help young people experience a Tall Ship voyage – Vitamin Sea Sail. 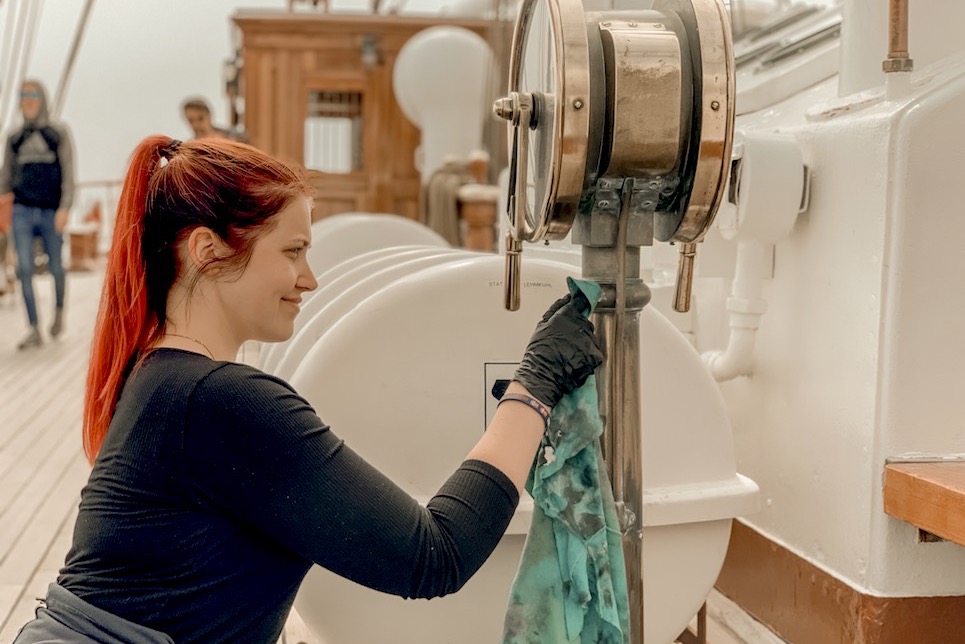 My name is Eline Kristiansen, and I am a 24 year old girl from Stavanger, Norway. I first participated in the Tall Ships Races back in 2011, sailing from Lerwick to Stavanger onboard the Dutch tall ship Morgenster. I was just about to finish secondary school, when I got the opportunity to join the races.

At the time I was in a place where I just needed to do something different. I have always liked being close to the sea and I figured out that I might as well give it a go! I am really happy I chose to do it, because it led me to where I find myself 8 years later – helping other young people experience life at sea with Vitamin Sea Sail.

In January 2019 I chose to start an initiative, Vitamin Sea Sail. The main goal of the program is to make sail training more accessible for young people between 18-25 years and also raise awareness about sailing and sail training. This year, Vitamin Sea Sail provided two scholarships at €2000, which covered the costs of participation in the Cruise in Company leg of the Tall Ships Races 2019.

The scholarships funded the sailing trip itself and the cost of transportation to and from the host ports. The money for the scholarships came from my own pocket, and it is without doubt the most well spent money ever.

The reason for why I chose to spend so much time and money on this project, is that the Tall Ships Races have given me so much – I wanted to give this experience to someone else. I now have friends all over the world, I have learned a lot about myself and what I am truly capable of.

My English speaking skills and cultural understanding have improved a lot since I first joined the races in 2011. Since I have been on ships with many different nationalities which has really helped me develop better social understanding skills. My self discipline has improved and I have also learned to trust and believe more in myself. All of these things have really helped me a lot later in life.

Whilst working on Vatamin Sea Sail, I have learned more about the importance of the digital world and how to use it in promoting charitable programmes. I have made particular use of Instagram and the website platform WordPress to inform people how to apply for the scholarships I have provided.

This has also given me the opportunity to write more about the Tall Ships Races and reach an audience of young people I would not normally have been able reach. I also did interviews on TV, radio and newspapers in Norway – these really helped a lot!

Stine and Henrik sailed with the Class A Tall Ship Statsraad Lehmkuhl (Norway) from Fredrikstad to Bergen this summer, and both of them really enjoyed it, and learned a lot. This is what they said:

There were a lot of thoughts rushing through my mind as I embarked Statsraad Lehmkuhl in Fredrikstad. I was afraid of getting seasick, if I would be able to sleep in my hammock and if I was going to make any new friends. Eline and Henrik came and greeted me as I entered the ship and in that moment I realised that this was going to be a great trip.

I knew immediately that it was going to be difficult to go to bed at 6pm and get up again for my watch at midnight, and then go back to bed at 4am. Luckily I got to observe the finest sunsets and the shiniest moonlight. There was a lot to do on board, everything from the different types of physical watches, to rope pulling and climbing in the rigging. I got a bit exhausted towards the end, but the great cooks on board made sure that we got a proper refill of energy!

Every day was a new adventure and experience, but my three favourite moments were when I got to climb up to the royal for the first time, our arrival in Bergen ( when I was standing in the top gallant, singing the ship into the harbour) and last but not least – the magnificent crew parade!

I was sure that it was going to be an amazing experience when I received the scholarship from Eline, but I didn’t realise that this was something I would remember for the rest of my life!

The journey from Fredrikstad to Bergen offered a lot of new experiences in general and the days passed by way faster than I expected. On board, I got to know people from all over Norway and the rest of the world. Some of them were first time they participants in the Tall Ships Races like me, while others had participated several times before.

Everybody had the same sort of perspective and really enjoyed being on board a tall ship. If you want new challenges and are not afraid of stepping out of your comfort zone, I would totally recommend you to join the Tall Ships Races. It is a memory for life!

Work is now in progress for new scholarships in 2020 and I hope to be able to send two new trainees on the Tall Ships Races again. I have already received some external funding and also donated funds myself. The program will once again sail with Statsraad Lehmkuhl and the planned leg is Race One, from Lisbon to Cadiz. If everything goes according to plan, the scholarships will provide about a week at the Races from about 4th-11th of July next year.

I am working with Sail Training International to me tell my story and spread the word about Vitamin Sea Sail to the rest of the world. The more people that know about this, the bigger is the chance that they can get an amazing experience at sea, regardless of receiving a scholarship or not. Even though the project is currently focusing on Norwegian and English speakers, I hope to expand it internationally in the future.

By letting people taking part of my journey on Instagram (@vitaminseasail) and on my own platform www.vitaminseasail.com, I hope I can aspire young people to try out the life at sea because it is absolutely amazing! I will be entering my ninth year in The Tall Ships Races next year and I could not be more proud!