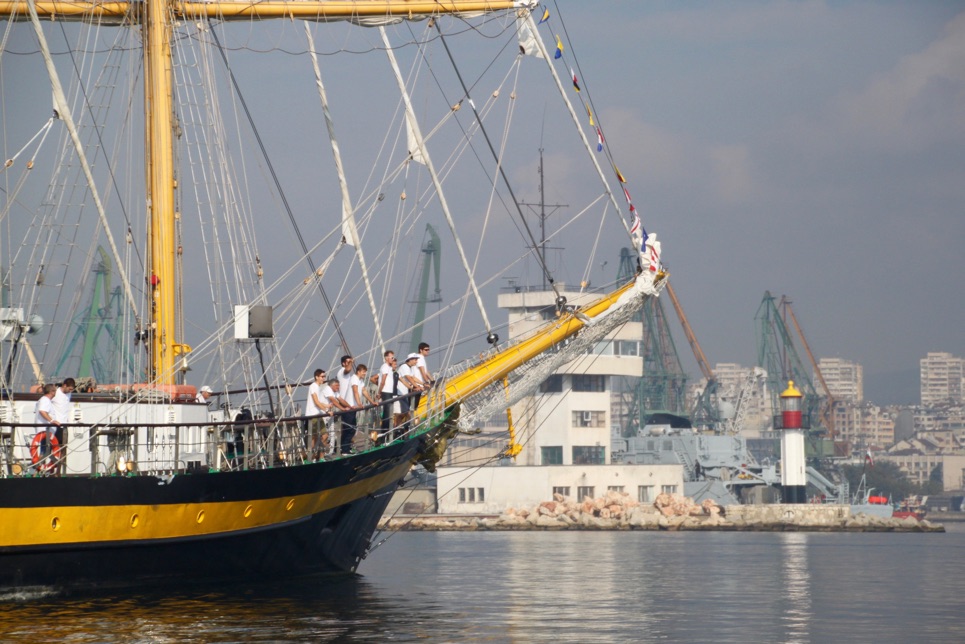 As dawn broke on the Port of Varna this morning, a thick sea fog hung over the ships already in port, and the arrival of Nadezhda (Russia), Kaliakra (Bulgaria) and Royal Helena (Bulgaria) was delayed until it had cleared. By mid-morning the sun had burnt off the fog, and the ships each made a majestic entrance into port.

Local ship Royal Helena was the first (pictured), and she was greeted by local boats and cheering crowds. As the crowd grew in number, Kaliakra (Bulgaria) made her entrance, coming alongside to a throng of film crew, photographers, friends, family and spectators. Nadezhda (Russia) came in a short while later, with her cadets standing aloft on the yard arms, waving and cheering. Kruzenshtern (Russia) followed just in time for the Official Opening, giving the port visitors a show as she took her place astern of Mir (Russia).

Prior to the official Opening Ceremony, the gathered press attended a briefing with officials, including the Race Chairman, Robin Snouck Hurgonje, the Mayor of Varna, Mr Ivan Portnih and Minister of Sport and Youth, Mr Krasen Kralev.

Race Director Paul Bishop summed up the Regatta: “The weather on the final race of the SCF Black Sea Tall Ships Regatta from Sochi to Varna has been ideal for the light racing sloop Akela from Russia, which revelled in the light and variable headwinds to achieve ‘line honours’ for a third time and also first place on Corrected Time.

It has been very challenging for the larger, heavier and more traditional vessels. Shortly after the start last Sunday, Adornate (Romania), took a bold move by heading south alone to seek the more favourable wind. Mir and the other Class A ships decided to head north to seek the strategic advantage there. The next 24 hours was very exciting to see which strategy would pay off.

Adornate came out on top and achieved a second place overall with Mir in third place. There was also some very tight racing between the three sisters all the way with Kaliakra coming out ahead of Pogoria (Poland) and Royal Helena. The Class placings for Race Three are:

Since starting the race series in Constanta on the 8th September, over 1,000 trainees and crews have sailed well in excess of 1,000 nautical miles under all weather conditions. Conditions have been tough at times (3 metre waves and gale force gusts) and the young trainees and cadets have all achieved a great deal.

It has been challenging both physically and mentally but they will have benefited by learning life skills such as teamwork, trust, tolerance with their fellow shipmates. These life skills and experiences will stay with them long after they leave their ships to go home in the coming days. ”

What’s next for the trainees and cadets?

This afternoon inter-ship sports began, including rowing and tug-o-war. These continue tomorrow and there will be fierce but friendly competition between the ships. Local visitors will be able to watch football and volleyball on the beach close-by and swimming competitions in the local pool.

Tomorrow (Sunday 2nd October) they will also take part in a parade around the streets of Varna, starting at 17.00hrs, followed by the final prize giving ceremony of the SCF Black Sea Tall Ships Regatta 2016.

What next for visitors to the port?

Want to dance with a six foot seagull? Try out dinghy sailing in an on-shore simulator? Walk around the deck of one of the world’s largest tall ships and ring the ship’s b