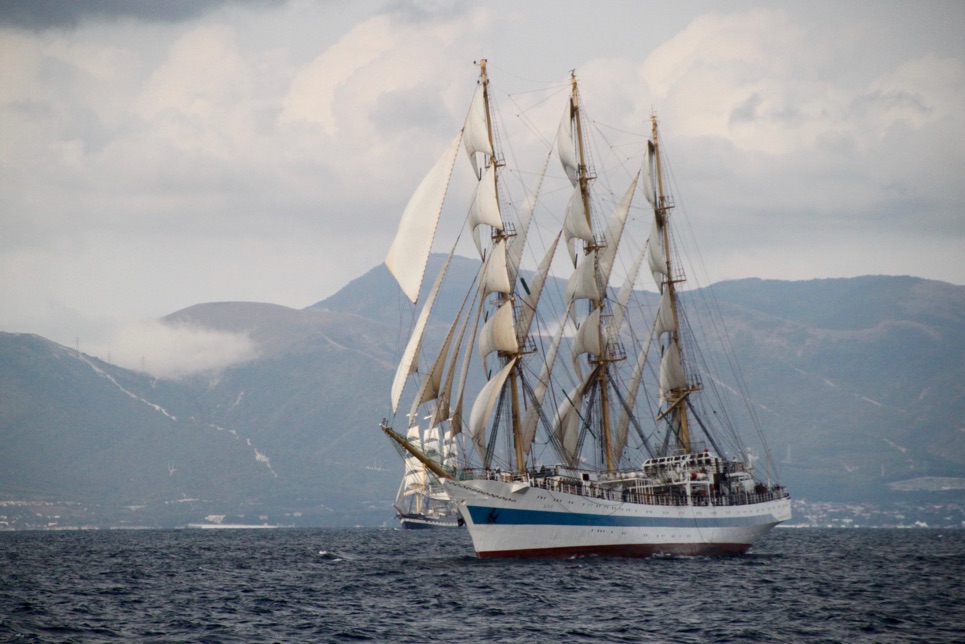 After the dramatic local weather of the past 24 hours, Race Two from Novorossiysk to Sochi got off to a much calmer start than expected.

A south easterly moderate wind took the ships over the start line earlier this evening (Monday). Russian ships Mir and Nadezhda made a spectacularly close start, with Mir crossing first, just seconds ahead of Nadezhda, her sister ship, though the latter had the windward advantage. Even as they disappeared over the horizon some one hour later, they could still be seen shoulder to shoulder. Royal Helena (Bulgaria) also made an excellent start, and was third across the line.

Class A’ crossed in the following order:

The Combined Class B/C/D vessels had a very competitive start, with both Akela (Russia) and Viking (Russia) reaching the line a little too early, having to manoeuvre to avoid crossing before the start signal. Akela went on to cross first, very close to the start vessel.

Line order for Class B/C/D was as follows:

Meanwhile Atyla (Vanuatu), was held up leaving port and so had a delayed start time.

äóìThe ships will have to sail close hauled and they will need to tack many times through the first part of this race to Sochi, which means a busy 24 hours for the crews,äó said Race Director Paul Bishop. “fter lunchtime tomorrow, the anticipated winds will turn south westerly, which will be more favourable for both speed and comfort for the second part of this short raceäó.

PAO Sovcomflot (SCF Group) is one of the world’s leading shipping companies, specialising in the transportation of crude oil, petroleum products, and liquefied gas, as well as servicing offshore upstream oil and gas installations and equipment. The Group’s fleet comprises 148 vessels with a total deadweight of over 12.8 million tonnes. The company is registered in St. Petersburg with offices in Moscow, Novorossiysk, Murmansk, Vladivostok, Yuzhno-Sakhalinsk, London, Limassol, and Dubai.äóÂThe Group offers a wide range of vessels in the market segments most demanded by major Russian oil and gas companies. With its own technical development and unique approach to advanced technologies, Sovcomflot has the ability to meet the most demanding customer requirements, providing effective transportation for oil and gas companies.äóÂThe Group is the title sponsor of SCF Black Sea Tall Ships Regatta 2016. Previously it was also the title sponsor of the similar event held in 2014, as well as a presenting partner of the Tall Ships Races 2009.äóÂwww.scf-group.ru