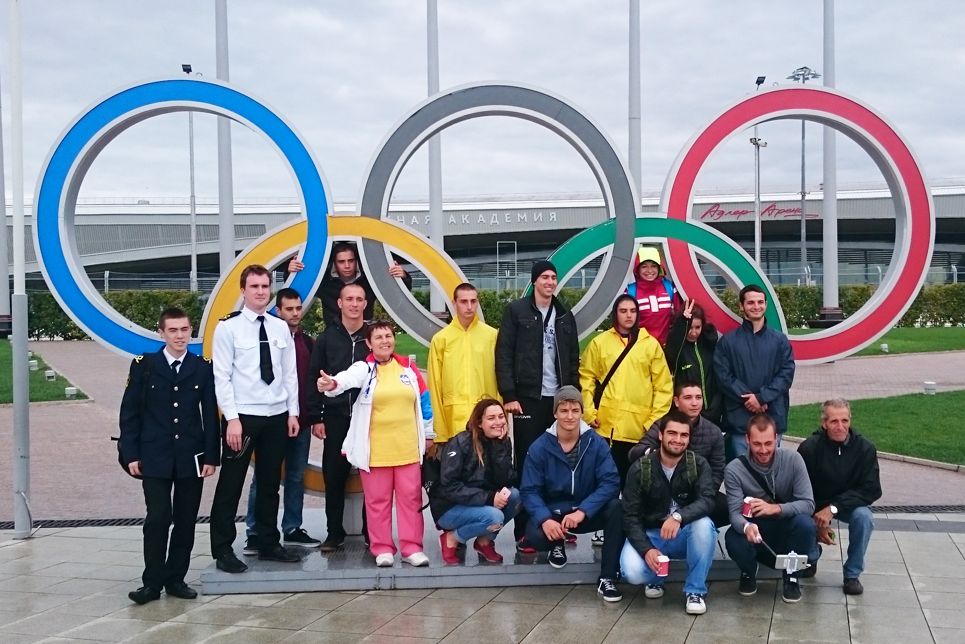 tumultuous clouds haven’t dampened anyone’ spirits, as thousands of

visitors have flocked to the port over the past three days, amidst a sea

of umbrellas and colourful rain ponchos. People are lining the port to

visit the impressive fleet of Small and Tall Ships, and to be part of

this prestigious event. Many vessels are welcoming interested visitors

across their gangways and onto their decks, which gives members of the

public the rare and privileged opportunity to see these beautiful ships

up close and personal.

22 September), cadets, trainees and crew members were given the chance

to visit the 2014 Winter Olympic Park, just outside of Sochi. It proved

hugely popular, with people queuing to join the excursion.

of the Bolshoy Ice Dome, which has been converted into an ice theatre,

the Sochi Medals Plaza, and the Sochi Autodrom (home of Russian Formula

1). The Sochi Autodrom was a particular favourite of crew members from Royal Helena, Kaliakra and Khersones,

who jostled for positions on the podium, where Vladamir Putin presented

the Russian Grand Prix winners with their trophies in 2014-2016.

You can check out some of the photos from the excursion to the Olympic Park in our Best of Sochi gallery.

international friendship and understandingäó_ along with encouraging

people to take part in an adventure under sail. As part of this, crew

activities in host ports play an important role. They promote

international teamwork and understanding, while encouraging people to

connect with others from different races, religions, cultures and

In Sochi, trainees, cadets and crew members took part in a

range of activities, kindly hosted by a local school. These include

News From Behind the Sails

the excursion to the Olympic Park, we had the chance to catch up with a

trainee. We asked her about her experiences of the SCF Black Sea Tall

Ships Regatta 2016äó_ and this is what she said.

Have you been sailing before?

äóìThis is the first time I’ve been sailing – I really want to go again after this!äó

How did you find the experience?

äóìI was scared at first, especially when the ship was in big waves and bad weatheräó_ our ship is not as big as others, such as Mir. But then I really enjoyed it.äó

Did you get seasick?

äóìI didn’t get seasick, but at first I felt unwell. You just need to go above – it’ a good cure.äó