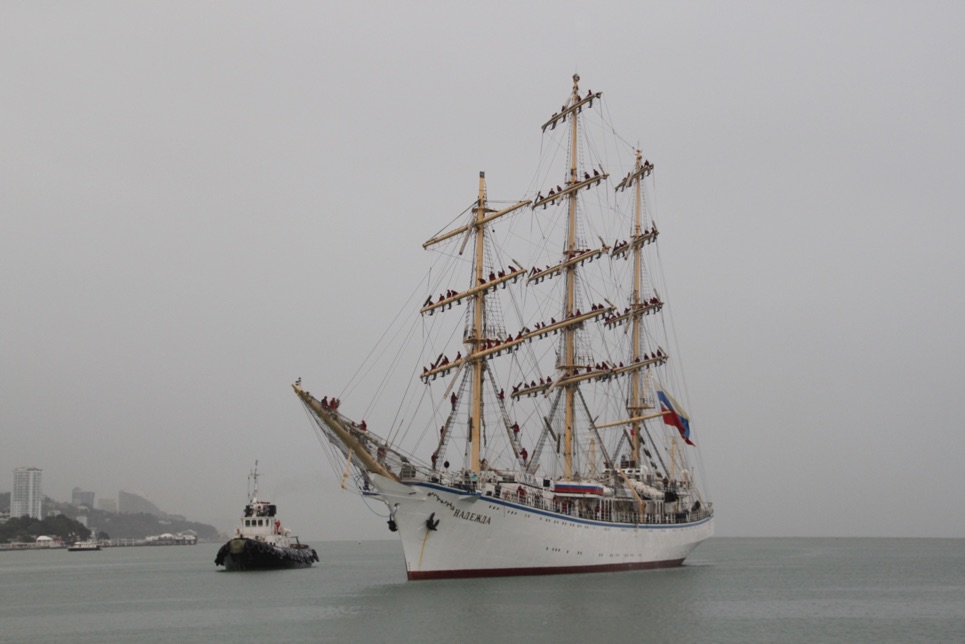 in Sochi made an amazing entrance. After travelling over 10,000 miles to

damaged in a storm during Race Two. While the rest of the fleet arrived

in port yesterday, Nadezhda, the three-masted Russian ship, went to a nearby port for inspection and repair.

Regatta fleet and gracefully entered the port, with cadets aloft on the

yards. Greeted by horns from the ships and cheers from the crowds, she

made her way in, in pouring rain and with the grey skies and seas, which

made for an ethereal arrival.

The cadets on board have obviously

been spending their time learning dance moves, as no sooner had they

climbed down from the masts, they lined up along the main deck and broke

Ocean.äó We hope to see that again sometime, in either Sochi or Varna!

during Race Two, Novorossiysk to Sochi. We are delighted that she will

continue racing to Varna, where she is guaranteed an extra special

äóìWe will miss the exciting competition between Mir and Nadezhda, but she will still have a good race to Varnaäó added Race Chairman, Robin Snouck Hurgronje

With the aid of a tug, Nadezhda

gradually took her place along the quayside, behind her sister ships

Mir and Khersones. It is a rare sight to have the three sisters, side by

Despite heavy rain for much of the day, a constant flow of

visitors have kept on coming to see the ships. Meanwhile many of the

The weather is due to clear tomorrow, in time for the start of the

Group) is one of the world’s leading shipping companies, specialising in

the transportation of crude oil, petroleum products, and liquefied gas,

as well as servicing offshore upstream oil and gas installations and

equipment. The Group’s fleet comprises 148 vessels with a total

deadweight of over 12.8 million tonnes. The company is registered in St.

The Group offers a

Russian oil and gas companies. With its own technical development and

unique approach to advanced technologies, Sovcomflot has the ability to

transportation for oil and gas companies.

The Group is the title

the title sponsor of the similar event held in 2014, as well as a