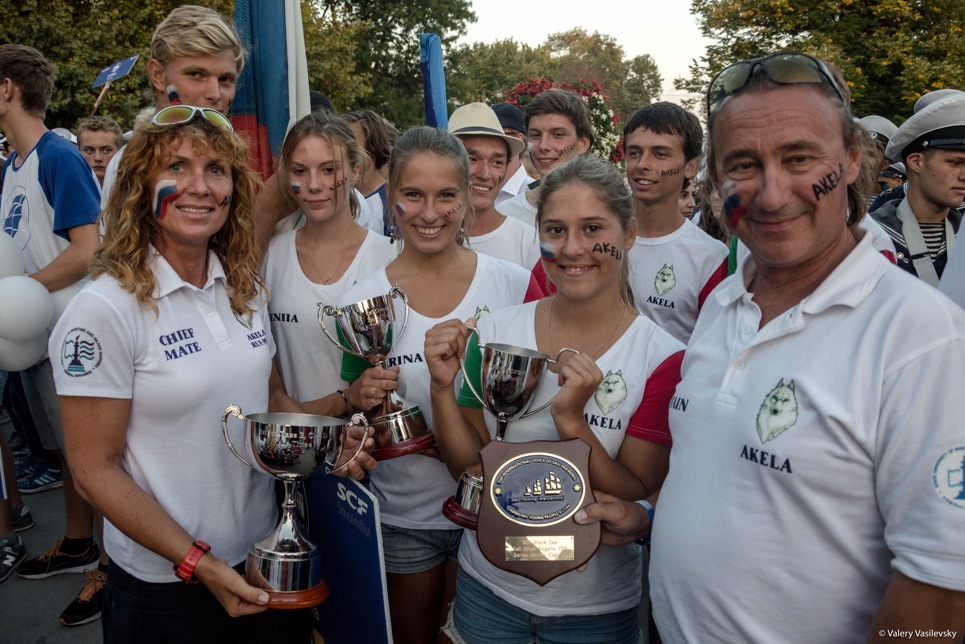 A busy day for the cadets, trainees and crews today with the sports competitions, crew parade, race prize giving and finally the crew party. With the quaysides buzzing with people enjoying the sights in the late summer sunshine, there has been something for everyone here in Varna.

Visitors have been not only able to walk on board the ships, they can have dance lessons, enjoy fair ground rides, have their faces painted or just relax at one of the many bars and restaurants along the water’s edge whilst soaking up the atmosphere.

Late in the afternoon the Crew Parade, led by a military band, made its way through the streets of the city, giving late afternoon shoppers an unexpected treat. As the parade progressed, it was joined by a troupe of majorettes and a second marching band, along with street artists and stilt walkers.

You can see snippets from the crew parade on our Facebook page.

The prize giving took place in the beautiful Sea Gardens. The crews took their places in front of the stage, watched by hundreds of local people, who were thanked by the Sail Training International Race Chairman, Robin Snouck Hurgronje not only for their presence at the prize giving, but also for their warm hospitality shown to the crews over the last few days. After a month together, the fleet will say goodbye to each other in a couple of days, and the Chairman spoke of the friendships that will have been formed and lives changed during the Regatta. “We have crossed the Black Sea two times, sometimes with strong winds, sometimes with light winds and sometimes with no winds, but we have done it!”

Awards presented by the City of Varna

presented by the Mayor of Varna, Mr Ivan Portnih.

3rd Class A on corrected time:

2nd Class A on corrected time:

1st Class A on corrected time:

Pogoria (Poland), with an average age of 23 years 1 month

Most international crew (8 nationalities out of 11 people on board)

Ship that has come the furthest from her home port to participate:

And now for the very special award…..