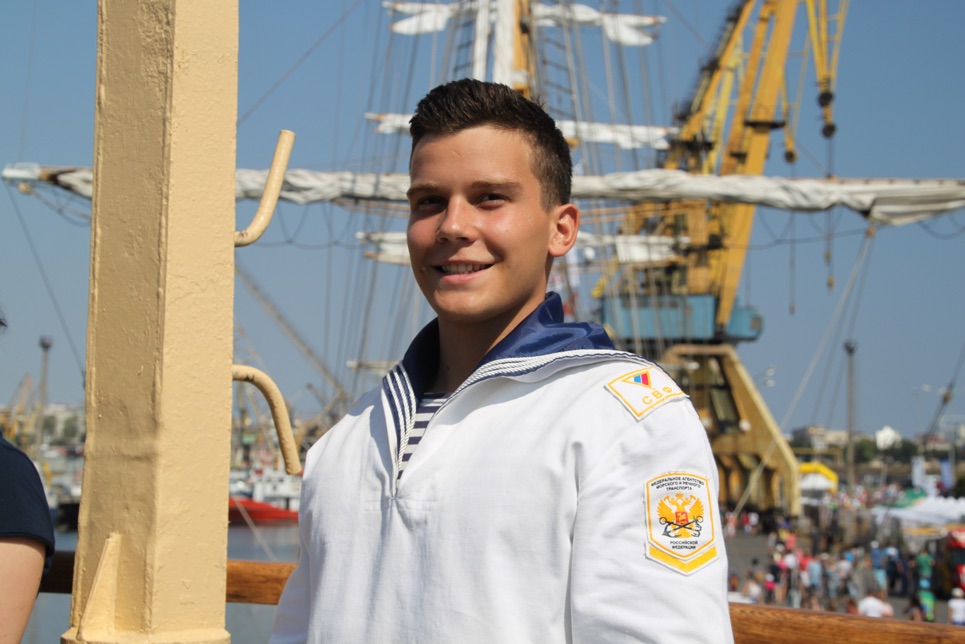 Winner of yesterday’ prize for the furthest ship from home was presented to Nadezhda (Russia), who has travelled some 10,700 nautical miles to be in Constanta, having departed Vladivostok on 28 June 2016.

Imagine then, the feeling of sailing into the Port of Constanta, 40 meters aloft near the top of the mast, waving and cheering to the crowd and seeing the port and cityscape for the first time after two months of seeing little but the sea, sun, stars and the moon! äóìIt was so amazing for me,äó said 1st year cadet Artur Osipenko (pictured). Speaking of the start of his voyage, he said äóìI felt scared at first, but when I arrived on board I knew I was going to have a great time and one I would never forget. Originally I had signed on for medical school to be a doctor, but I then knew that my decision to instead go to the Maritime Academy had been the right one for me.”

Talking of his daily routine, Artur said “Sometimes it can be very hard work. Handing the sails being the hardest. At first our hands were very sore, but now everything is okay.  There are 115 cadets on board and we are divided into watches for the three masts. We alternate between lessons, taking watch on deck and resting.

I don’t really know what to expect from this first race.  But I do know I will be doing many more!äó

Benefits of joining the Tall Ship Races and Regattas

Officer Alexander Tsymbal explained that the events offer so much more than regular training. äóìInternational communication being of great importance, and most important after sailing skills. It may be the only Regatta the cadets will do in their lives and they will remember it forever.äó

We will catch up with Artur and the crew of Nadezhda later in the Regatta.

Behind the Sails:  We asked some trainees to tell us about their feelings thus far.

Have you sailed before?

No, but it is a great experience to sail, train and make your dreams come true.

Why did you apply?

Because I realised that sailing on a tall ship is some part of me, but I didn’t know that part.  Being in the sea is amazing way of life.

How do you feel about the challenge of sailing?

I am very excited! Being in the sea is one of the best things that can happen in my life.

What are you most looking forward to?

I am looking forward to the beginning of the race! For the real race, fight with the wind and the waves. I hope that the weather will be with all of us!

What are you least looking forward to?

Well it will be very sad when this month finishes. Being on board is much better than staying in the safety zone at home. I will miss the seaäó_.

Ps. I want to wish to all the ships in SCF Tall Ships Regatta 2016 good weather, good luck and peopleäó_..enjoy life!  Enjoy sailing!

Have you sailed before?

Yes. Ive been sailing for two months now. I have been working on Atyla as the coach running the personal development programme.

How do you feel about the challenge of sailing?

Fine, I love being out in the sea, with hard conditions.

What are you most looking forward to?

What are you least looking forward to?<