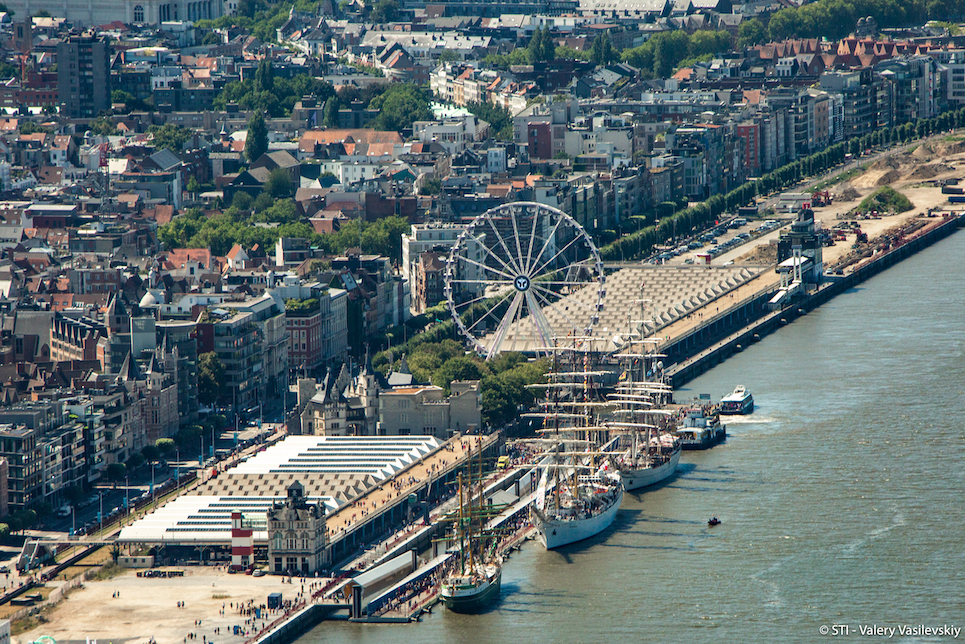 With more sunshine covering the city, thousands more spectators a visitors took the opportunity to see the majestic Tall Ships fleet up close and personal. During the first two days of the event, over 700,000 people have come to see the spectacle of the fleet and today was no different. For the Captains and crews though, it was time to start making tactical decisions that would come into play during Race Two to Aalborg, Denmark.

Coming from across the Flanders region, visitors have a number of cultural events, live music and stunning fireworks to create what has already become an unforgettable weekend of celebrations. Taking in the transformation of the city was best done from the skies, showcasing the magnificent fleet along the quays of the Scheldt, Kattendijk dock and the docks around the Museum aan de Stroom.

We’re pleased to be able to provide a range of funds that support the continued delivery and development of Sail Training, especially during The Tall Ships Races.

We were delighted to be able to help over 20 young people from around the world, through the Oman Bursary Scheme, to experience the life changing impact of an adventure at sea during the Cruise-in-Company from Harlingen to Antwerp – and this morning they were all invited on board Shabab Oman II (Oman) alongside Race Chair, Magda Makowska, to meet the captain and crew representing the Royal Navy of Oman around the world.

Alongside the celebrations in port, the weather looks like it will ultimately have an impact on the currently planned race course from Antwerp to Aalborg. The weather for the fleet making their way to the start line looks to be challenging with north-westerly winds of around 25 knots. But by the time they reach the north sea, these are forecast to calm down dramatically and leave the beginning of the race to Aalborg with very light winds.

These light winds will accompany the fleet through Thursday 27 July and there are signs that, by Friday 28 July, these will pick up in a favourable southerly direction. With the winds also forecast to continue to pick up on Saturday, it looks to be a test of who can set themselves up best over a slower start.

At this stage it is anyone’s guess who will make the right decision during Race Two, but one thing is for sure – there will be changes to the race course, which will announced in tomorrow’s update.

Antwerp is a European metropolis on a human scale. It has hosted the Tall Ships six times since 1993, and 2022 will see the diverse city entertain crews and visitors once more…

Antwerp is a pocket-sized metropolis and Europe’s second-largest port. It’s a melting pot of cultures, with 164 different nationalities living and working within it.

Located in the heart of Europe, Antwerp is Belgium’s second-biggest city, with a penchant for vibrant fashion, entertainment and architecture. It was also voted one of the top 10 most attractive and enjoyable cities in the world by Lonely Planet. The city was awarded the Bronze Award at the BEA 2017 Awards as a recognition of the great success of the Tall Ships Races 2016 event.

The Tall Ships Races 2022 will see the international fleet of Tall Ships and Small Ships return to the North Sea. From 7 July-7 August, we will visit Esbjerg, Harlingen, Antwerp and Aalborg.

The event will mark a welcome return to all four Host Ports who have hosted a total of 16 Tall Ships Races and Regattas so far. The series will see the Tall Ships sailing from Esbjerg, Denmark, south through the North Sea to Harlingen, Netherlands, as part of an exhilarating Race One.

Following this they will enjoy a stunning Cruise-in-Company leg further south to Antwerp, Belgium, enjoying spectacular coastal sailing. Race Two will take the fleet from Antwerp, Belgium, back north through the North Sea to Aalborg, Denmark, for the final celebrations.