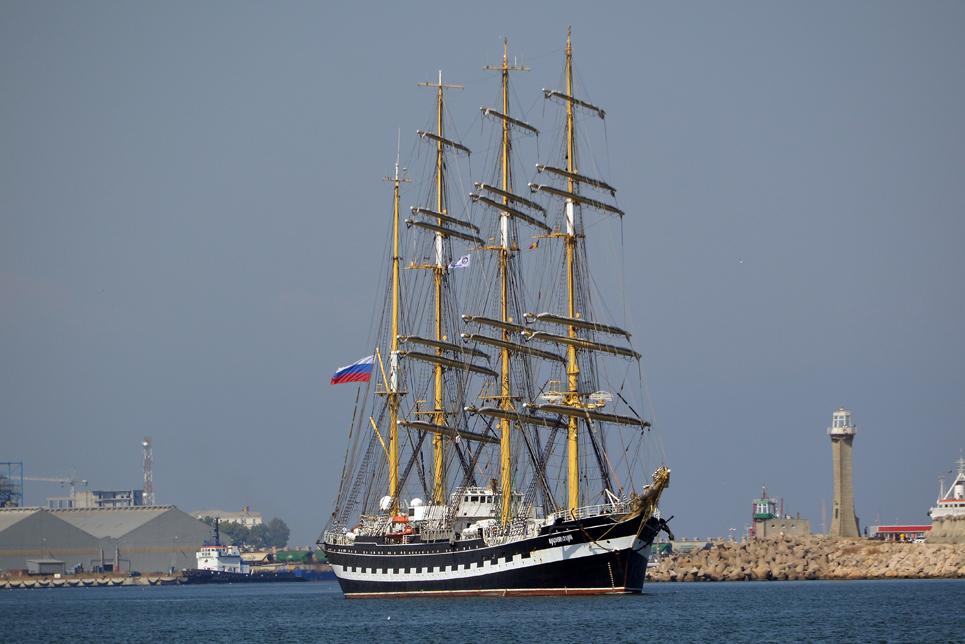 continues to dominate the race. Being small and light, she has been

able to keep up a reasonable speed and stay close to the rhumb line.

Having passed the waypoint off Crimea, she has less than 50 NM to go. By comparison, Atyla (Vanuatu), at the rear of the fleet, has just under 300 NM to go and has needed to do much tacking to get that far.

Combined Classes B, C and D

The light and variable headwinds that have prevailed since the race start have hindered the majestic Kruzenshtern (Russia) which is the second largest and heaviest sail training Tall Ship in the world.

of the event on Friday (16 September), the race committee have decided

to bring forward the time limit to 16:00 GMT for Class A vessels and

September). This will mean that after the positions have been recorded

the ships will be able to start engines and motor to Novorossiysk.

“All non-retired vessels will still get a race result due to our ‘finish at sea’ routine.”

You can track the ships using the YB tracking system, a device carried by each vessel with live tracking updated every 15 minutes.

Behind the Mast: Strange Happenings On Board Adornate!

Received today from somewhere in the Black Sea:

äóìTwo young seamen vow faith to the sea on board Romanian Schooner ADORNATE.

14th September 2016, on board Adornate, the only ship under Romanian

young cadets entered in the World of the Seas. His majesty God Neptune

was disturbed from his afternoon siesta by some dolphins. Those dolphins

which are not have the seaman baptize. This thing unpleased him, and

also god Eol did not help the seamen for this great race. Therefore, He

below the sea for eternity. Here the crew waited Him with all the

necessary for the ceremony. The two young novices were shaved from sins

with deck soap, drink a glass of sea water mixed with red wine and bath

them with water from the sea. Now, Victor Pavel – 15 years old and

Adornate. They received the name of Happy Mowgli and Stinky Baloo. May

Neptune, alias Poseidon, also known as Ocean or Aegir, have mercy and