At Sail On Board, we’re pleased to support several bursary schemes and scholarships for young people who wouldn’t otherwise be able to participate in our events.

For some people, fundraising is a great option – we have a fantastic fundraising section with lots of fun ideas to help you reach your target. For others, additional financial support is available from bursaries or scholarships. Some people even combine the two!

Find Out About Fundraising

With similar goals to our other bursaries, the scheme is aimed at people of any age and who live with a disability. The purpose of the fund is to encourage self-development by actively participating in a Sail Training voyage on a Tall Ship during a Sail Training International Tall Ships Race or Regatta.

How Did the Bursary Start?

The bursary was founded to honour the memory of John E. Burnett. As a talented young production engineer at the onset of World War II, he wished to serve in the Royal Navy, but his skills were thought to be more valuable at home.

After a successful career, he founded his own manufacturing company. He somehow still managed to find time to help others and worked with the UK charity Remap to make custom-built equipment to help disabled people live more independent lives.

After losing a leg to osteosarcoma, John experienced the same difficulties facing the charities beneficiaries himself. Sadly he did not survive to enjoy the retirement that, after a lifetime of hard work, he rightly deserved.

His family immediately thought of John when seeing the Class A Tall Ship Tenacious (UK) in Funchal, Portugal, and speaking with its crew members. After learning of the surprising range of possibilities that life on a sailing ship offers people with disabilities, they were inspired to found the bursary.

The John E. Burnett Bursary Scheme is open to anyone, but preference will be given to applicants who have never taken part in a Tall Ships Race or Regatta. We welcome financially or physically disadvantaged people of any age, regardless of nationality, background, physical ability, or previous sailing experience.

The maximum amount awarded is £600 each (if living outside Europe, exceptions may be made for long distance travel costs).

In 2012, we had the pleasure of launching a bursary scheme in partnership with the Sultanate of Oman. It aims to foster international friendship and provide new and exciting opportunities for up to 100 young people each year. It does this by helping them to experience a sail training voyage on a Tall Ship during a Sail Training International (STI) Tall Ships Race or Regatta.

STI has enjoyed a long, positive relationship with Oman. The country is regularly involved with our events and is committed to developing young people. Both things that we value!

How Did the Bursary Start?

We trialled the scheme at the Tall Ships Races in 2011 and launched it officially in 2012. Back then, we awarded funds to 25 trainees from seven countries – the Royal Navy of Oman has funded the scheme every year since.

The RNO also presents the Sultan Qaboos Trophy, which it awards annually to the organisation or individual who has done the most to promote sail training for young people.

Since 2013, RNO and Sail Training International have worked together to bring young Omanis to Europe to participate in STI events on board other nations’ ships.

The Oman Bursary Scheme is open to applicants who have never taken part in a Tall Ships Race or Regatta (training). We welcome financially or physically disadvantaged people between 15 and 25 years old, regardless of nationality, background, physical ability, or previous sailing experience. The maximum amount awarded is £450 each (if living outside of Europe, exceptions may be made for long distance travel costs).

We receive applications from a huge variety of young people from all walks of life and from all over the world. Trainees’ support letters often reveal their dedication, motivation and sometimes the difficulties that they’ve faced, such as health and personal problems. Those who are awarded the Oman Bursary achieve something special – they become part of a team of people from different nationalities in a new and exciting environment, form friendships and make memories that last a lifetime.

You can see the full list of Oman Bursary approved vessels below.

How You Can Apply

Here are some of the thoughts and reflections from previous Oman Bursary winners. 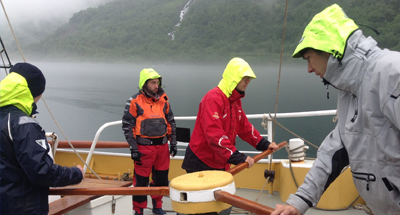 “The high sea can be a harsh environment, so it quickly creates strong bonds between people!” – Xavier Wadbled

“Being afraid of heights, I experienced my moment of true happiness… climbing to the highest point on the ship while sailing… enjoying the view of a lifetime.” – Davis Odzins

To see what other recipients of the Oman and other sail training bursaries have been saying, check out their testimonials.

Vessels need to meet the following criteria to be approved:

1. When participating in an event organised by Sail Training International, vessels must comply with the current Racing & Sailing Rules and Special Regulations for Tall Ships Races and Regattas (only applicable for participating vessels).

2. Captains and officers must be duly qualified and hold all necessary certificates required by the laws of their country to undertake the planned voyage.

3. Vessels must be legally registered, licensed and insured to sail with trainees and take part in all programmed activities whether in port or at sea (including racing where relevant) and approved for the sea area of the voyage. A copy of the vessel’s registration certificate may be required.

4. Vessels must hold an appropriate commercial certificate to take passengers or trainees, and they must submit a valid annual inspection certificate from their Certifying Authority which is approved for the sea area of the voyage.

5. The vessel’s stability characteristics and certification must be appropriate for the sea areas and season of the voyage being undertaking.

6. Vessel operators must hold valid insurance cover against third party claims and injury, death or other loss to trainees, staff, or volunteers to a minimum British pounds £5M for the class of voyage and activities to be undertaken.

7. Must have a Safety Management System (SMS) appropriate to their vessel. This can be in the language of the ship.

8. Must have a trainee safeguarding, welfare and protection policy in place and a system for criminal record checks, or, where there is no national system, an internal system for checking references for their sea staff and adult volunteers.

9. Vessel operators must have a proven safety and a proven track record (2 years) of delivering sail training voyages for young people.

11. In all cases, STI has absolute discretion over decisions regarding the award of bursaries or funds.

Sail Training International is pleased to be able to be able to offer the Youth Development Fund, an annual fund provided to support a range of projects aimed at helping youth development.

We would like to extend our thanks to the Royal Navy of Oman whose generosity has made the Youth Development Fund 2021 possible. Having supported countless young people to have a Sail Training adventure through the annual €50,000 Oman Bursary scheme since 2011, their continued support means we are able to bring the transformative experience of Sail Training to young people around the world.

The James Myatt Trust is a registered charity that’s run by trustees. Its aim is to support young people who are keen to take part in a sail training adventure in the U.K. and abroad.

The Trust has awarded 31 bursaries this year, across all of our Races and Regattas.

How Did The Trust Start?

In 1984, James Myatt’s friends and family started the trust. They made generous donations in his memory to help young people and sail training in general.

James Myatt was a keen sailor. His love of the sea began when he joined the Sea Scouts as a teenager in the U.K. Later, he led many voyages during the early days of sail training… and won the first Sail Training Association race across the Atlantic in 1964. He really valued the role of international friendship in sail training, and even helped to introduce Polish and Russian friendship cruises during the Cold War!

James later worked for the British Army, focusing on youth and leadership training. During his time there, he become special advisor to the new Duke of Edinburgh’s Award Scheme – something that many of our trainees take part in today.

If you’re 16-25 years old and are prepared to raise a portion of the funds yourself, this could be the right option for you.

The Trust awards several different, and will even consider funding more than one person from a group. It focuses on voyages operated by the Association of Sail Training Organisations (ASTO).

ASTO has vessels from 18m to more than 60m in length, and schedules voyages that can last between two and 14 days. So, you’ll be sure to find a sail training voyage that suits you and your timetable!

The James Myatt Trust also offers special grants for two young people every year. The ASTO handles applications for these, and they are usually awarded to people with a track record in sailing. You’ll need to be recommended and supported by a sponsor organisation.

The Trust asks for a full report from everyone who takes part. They love to receive a record of the voyage, hear your thoughts and feelings, and see photos from your trip.

How You Can Apply

Visit the James Myatt Trust website for more information and an application form.

For more information, contact the Trust Secretary at jan.gauntlett@talktalk.net.

“My exchange visit to Canada has been an unforgettable adventure! I am incredibly grateful to ASTO for organising this exchange and James Myatt Trust for their sponsorship. I had a fantastic time aboard the Tall Ship St Lawrence II, with thanks to all of the crew from Brigantine Inc. on the ship and the staff in the office. As ASTO allowed me to fly out earlier I had the opportunity to explore a little extra of Canada as well and completed my Gold Duke of Edinburgh Expedition, in Algonquin Provincial Park by Canoe which was fantastic.” – Sarah Asplin.

“I loved getting to grips with a new Ship – I wanted to know how everything worked and found myself inspired by all the new things around me; from different sails, to different ways of structuring the voyage, to different young people. All of the young people wanted to get the most out of their ten days – it was something they were really looking forward to! They were totally driven to learn and to take the lead and that’s what Spirit of New Zealand works to develop.” – Peta Koczy.

Don’t know how to go about raising funds for your Voyage? Join the Windseeker Dinghy Programme!

Just like a literal dinghy, the Windseeker Dinghy Programme is designed to help you make your way from dry land onto a Small Ship or Tall Ship at sea. It’s an online fundraising training scheme run by the experienced team at Windseeker. Making use of their years of experience with helping young people to have an adventure at sea, the Windseeker Dinghy Programme coaches will give you all the tools and guidance you need to raise funds for a voyage. You’ll even get access to an online community of young trainees for networking and extra support!

The Windseeker Dinghy Programme is open for everyone aged 15-25 (other ages can apply) who wants to join a voyage available with Windseeker – including many Tall Ships Races journeys and Sustainable Sailing programmes. There is a refundable participation fee of €50 which is refunded in full after completing the training – so really, the only thing it costs you is your own effort!