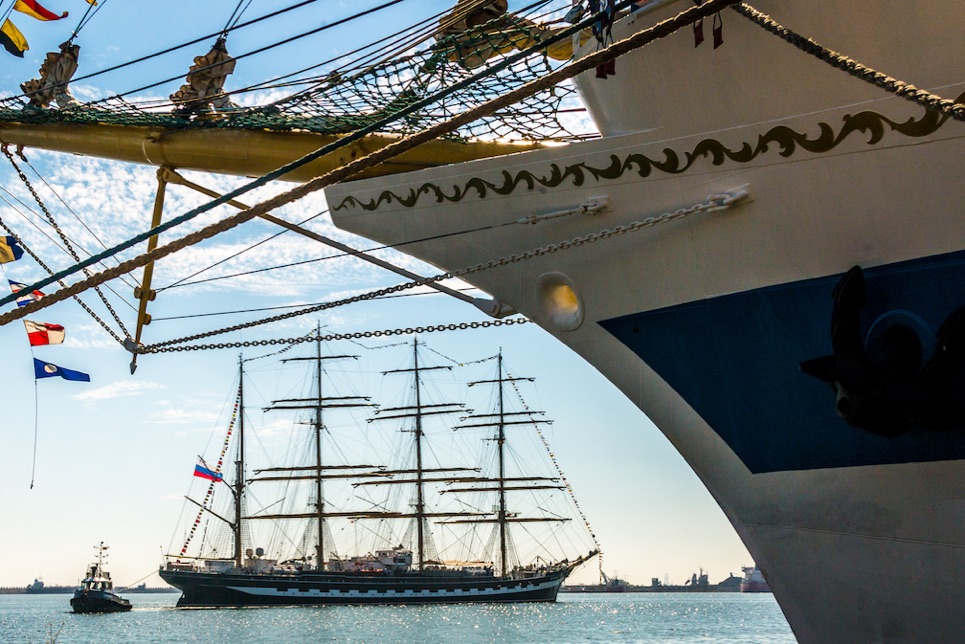 A spectacle for early risers

The first official day of the SCF Black Sea Regatta 2016 started in spectacular fashion early this morning as Nadezhda (Russia) elegantly made her way into port, guided by two tugs who assisted in her making a 180 degree turn before coming alongside.  Her trainees up in the yards cheered and nearby ships blasted their fog horns in welcome.

A short while later the iconic ship, and largest in our fleet, Kruzenshtern (Russia) (pictured), slowly made her way into port.  By now crowds had gathered in the bright sunshine and the Russian Sailing Team from Akela (Russia) lined up smartly on the quayside to welcome their friends.

Later the official opening ceremony took place on the main stage, located in the centre of the pier, surrounded by the fleet.  The band of the Romanian Naval Academy entertained the crowds before the Deputy Mayor of Constanta, Mr Costin Rasavjeanu, Race Chairman of Sail Training International Mr Robin Snouck Hugronje, Manager of the Port Administration Mr Ambroziu Duma, Rector of the Romanian Naval Academy Capt Assist Professor Dr Octavian Tarabuta, and the Archbishop of Constanta, took to the stage.

The Deputy Mayor began by welcoming everyone.  He said the tall ships provide a link between the sea and the shore, and the past and the present and while they are here we all have the chance to share in their lives for a while.

The Race Chairman told everyone that everyone is delighted to be back in Constanta, a port remembered well for its great hospitality in 2014. He also thanked the title sponsor of the Regatta, SCF.

äóìThe first Tall Ships Race took place 60 years ago, and the reason we we still here running these events is because of our mission to create the possibility for young people to have an experience upon a tall ship, as we strongly believe that the experience makes them better people.äó  He continued, äóìIt is also our belief that this will contribute to better mutual understanding and international friendshipäó.

After the Rector and the Port authority officials made their welcome addresses, the Archbishop blessed the fleet in a moving service, surrounded by his assistants and singers.

This afternoon thousands of people have been visiting the ships, mingling with the crew and learning more a