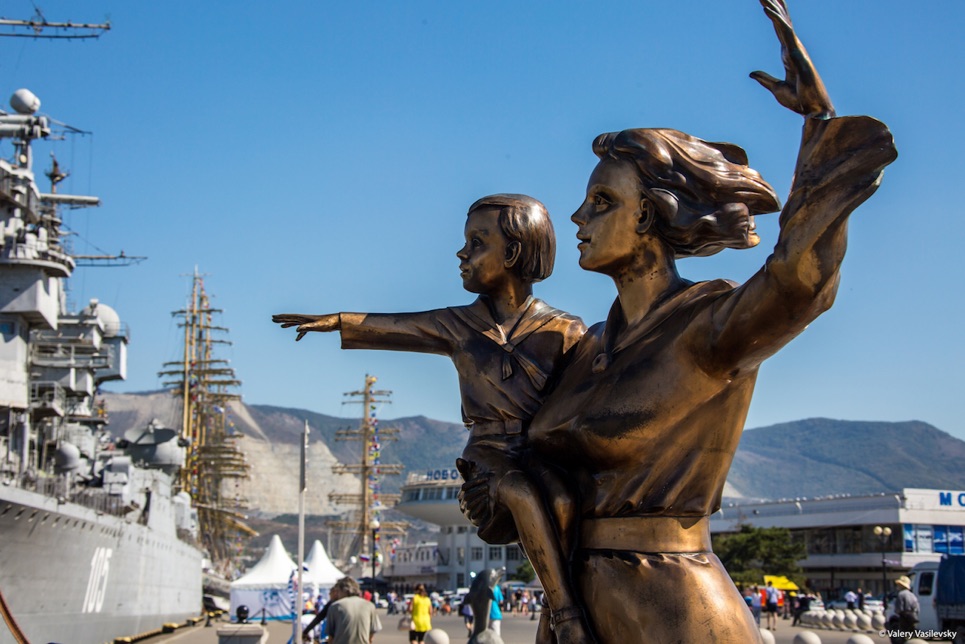 The port of Novorossiysk woke to yet another bright and sunny morning and the early arrival of Russian vessel Mir, followed a little time later by Nadezdha. They are now moored together with the third sister ship, Khersones, close by.

remaining fleet have been making spectacular entrances to the port

throughout the day, providing great viewing for the general public, who

are growing in number. An estimated 100,000 visitors are expected at the

port during the festivities.

The Ringing of the Bell

festival area, where a number of special guests took to the stage. Igor

Rosmorport and Alexander Poshivay, Deputy Director of the Federal Agency

of Sea and River Transport (Rosmorrechflot).

speeches, exchanged gifts, welcomed the fleet and thanked the Port and

äóìWe would like to express our gratitude to the city, the port and the

people of Novorossiysk. We know that everyone here loves the sea, the

ships and the people. We hope to increase interest in sailing in the

Black Sea area, and want to bring as many young people together on sail

training ships. This is because we believe that the experience of living

and working on board sail training ships will make them better people.

And we want to bring people together. Different people, countries,

cultures and backgrounds. This is how we bring our message of

The event was declared open

The ships will be

the ships as a background, a fireworks display will thrill the crowds on

Sovcomflot (SCF Group) is one of the world’s leading shipping

companies, specialising in the transportation of crude oil, petroleum

and gas installations and equipment. The Group’s fleet comprises 148

vessels with a total deadweight of over 12.8 million tonnes. The company

is registered in St. Petersburg with offices in Moscow, Novorossiysk,

Dubai.äóÂThe Group offers a wide range of vessels in the market segments

most demanded by major Russian oil and gas companies. With its own

Sovcomflot has the ability to meet the most demanding customer

Regatta 2016. Previously it was also the title sponsor of the similar

event held in 2014, as well as a presenting partner of the Tall Ships