As the sun sets on the Tall Ships Races 2017 over 4,500 trainees are now embarking on new life adventures around the world. Sail Training International takes a fond look back at the fun and racing everyone enjoyed this summer.

Entering our 61st year of races, the Tall Ships and Small Ships fleet headed north from the sunny climbs of Belgium, Portugal and Spain to the Baltic Sea for a three race series. Starting in Halmstad, Sweden, the fleet raced to Finland, Lithuania and finally Poland. 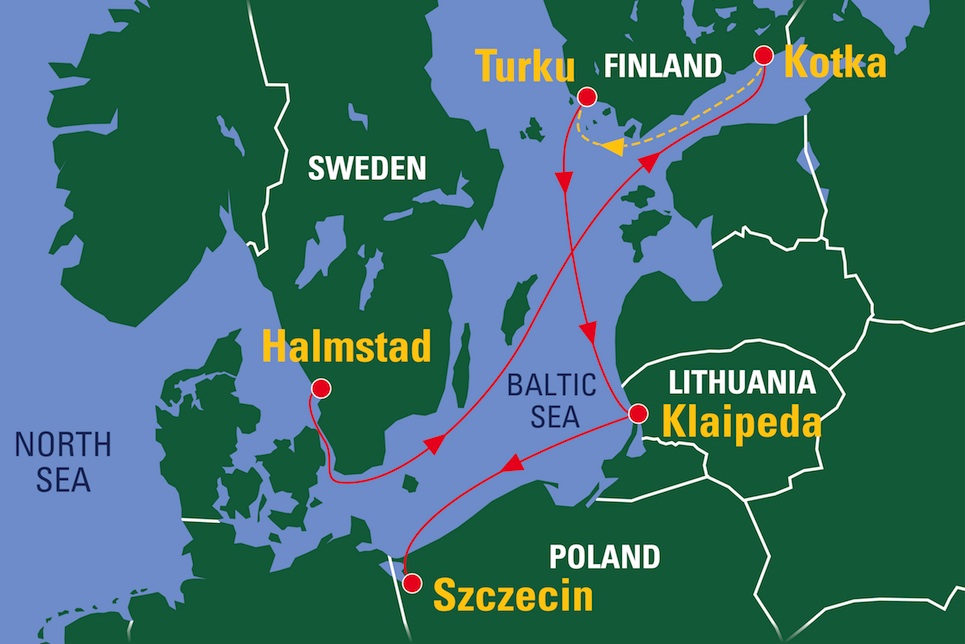 The adventures began in Halmstad, Sweden,when nearly 50 vessels started off the Tall Ships Races in this Swedish city for the second time in its history. The cultured seaside city welcomed the fleet and trainees with open arms and a variety of arts and entertainment.

Alongside the warm Swedish welcome, the festivities were highlighted by the Tall Ships Crew Parade, which gave visitors the chance to meet all the crews – in uniform and fancy dress. And Halmstad kindly provided sewing machines and accessories to help everyone make their creative parade costumes.

Throughout the event sustainability was a central theme, and to reflect this initiatives to make the event as environmentally friendly included; biodegradable mugs and plates, organic and vegetarian dishes. There was also a sustainability themed square, waste plans and guides and recycling points for paper, plastic and glass throughout the site.

Following the kick off celebrations in Halmstad, the Tall Ships fleet took part in the first, 450 mile race across the Baltic Sea to Kotka, Finland. With Finland celebrating 100 years if independence in 2017, the Tall Ships Races took centre stage in Kotka for their centenary celebrations as the city’s biggest ever public event.

Sail Training International’s Race Chairman, Sigurd Dale, speaking at a press conference on the opening day of the festivities said he was “delighted” to bring the Tall Ships Races back to Kotka for the third time after previous visits in 1992 and 2007.

“It really is all about the young people taking part and we want to stress that sailing in the Tall Ships Races is open to everyone. We’d urge people to visit the Sail on Board stand here in Kotka to find out more about opportunities.”
Race Chairman, Sigurd Dale, Sail Training International

Continuing the Tall Ships’ proud history of youth development, 50 young people from around Kotka boarded various vessels to take part in the Cruise-in-Company from Kotka to Turku, Finland. Following a Parade of Sail in near perfect weather conditions out of the Finnish city, they took part in four days of sailing in the Baltic Sea – creating memories that they will treasure for many years to come. 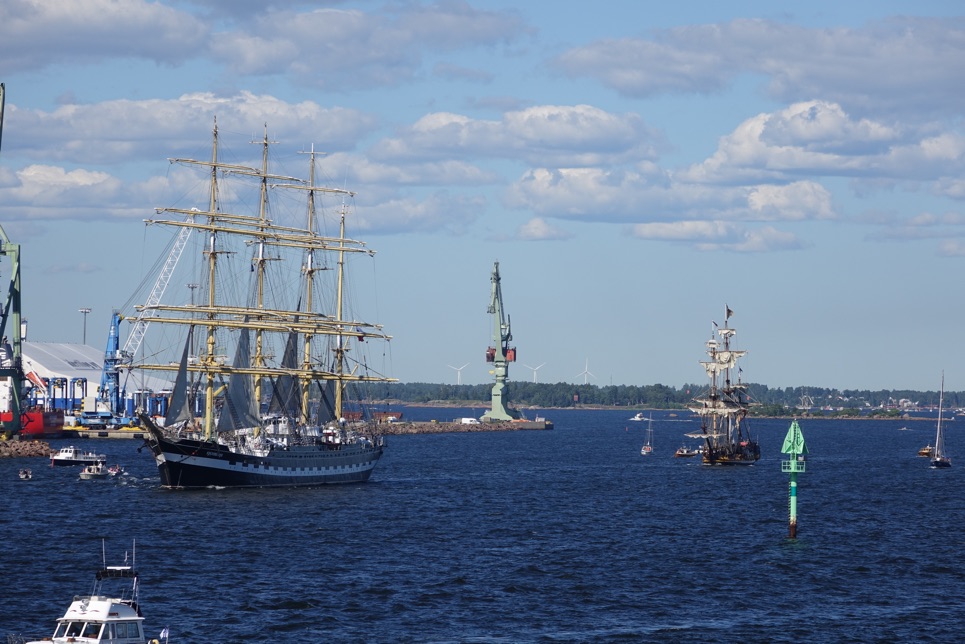 There were near perfect weather conidtions for the Tall Ships Parade in Kotka. 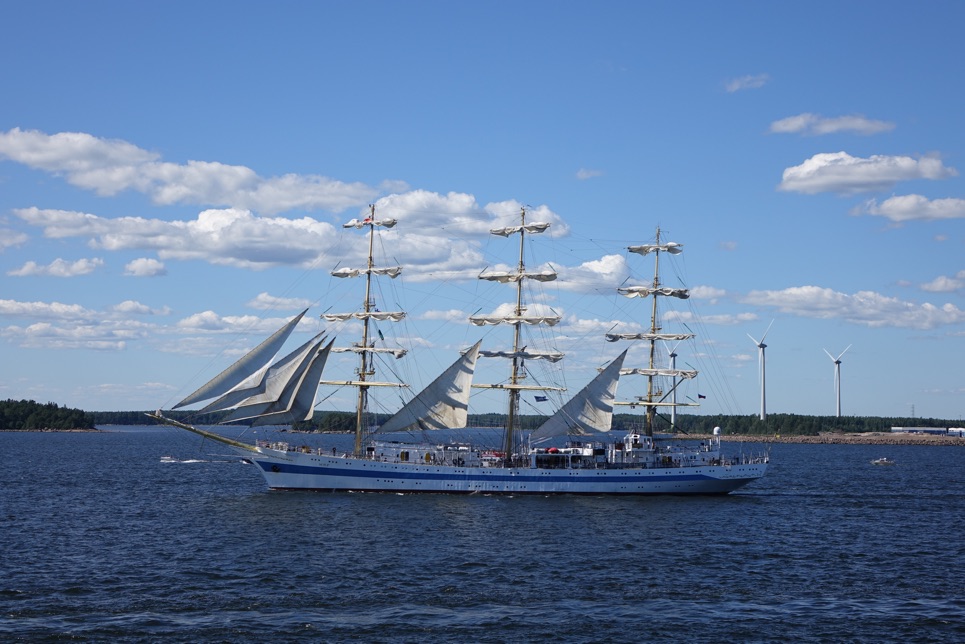 Mir in the Parade of Sail. 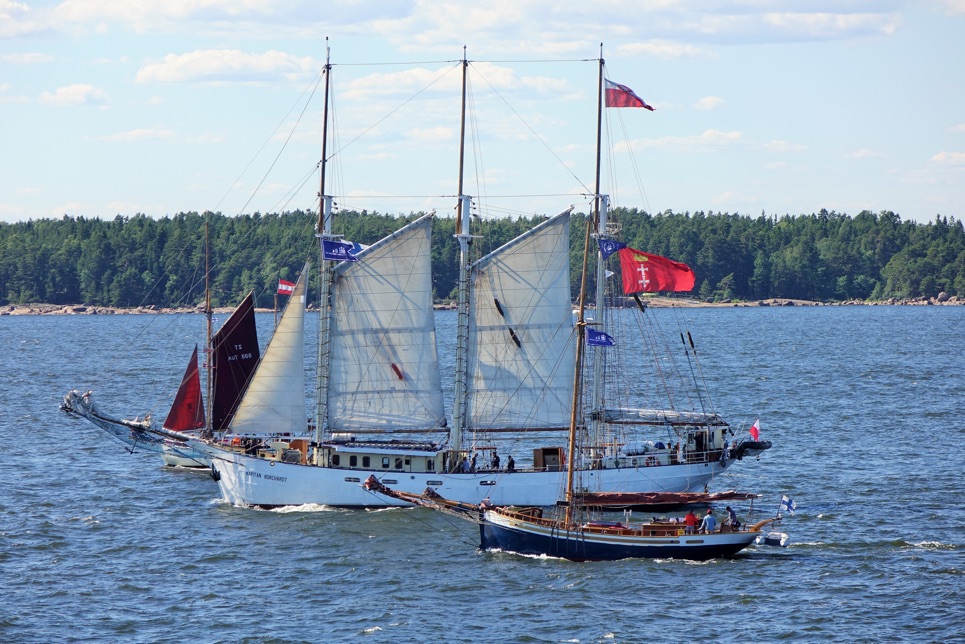 Kapitan Borchardt in the Parade of Sail. 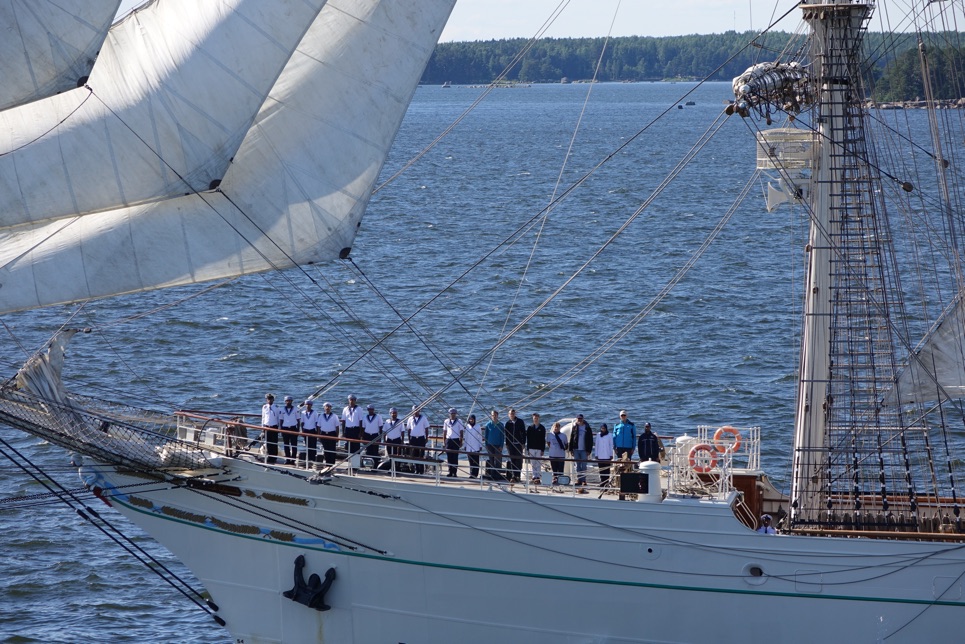 Shabab Oman II in the Parade of Sail.

With a wonderful maritime celebration that ran from 20 July to 23 July, the Finnish city of Turku was the next stop for the Tall Ships in 2017’s race series. This year marked the fifth time that the city on the river Aura has hosted the spectacle and over 500,000 visitors came out to visit the fleet and crews.

The River Aura provided the perfect backdrop for an explosion of vibrant colour, music and energy as the 81-strong fleet of vessels opened their gangways to the thousands of spectators. Among the visitors over the weekend was the President of Finland, Sauli Niinistö, who was on board the presidential yacht to view the Parade of Sail to mark the fleet’s final departure from Finland after visits to Kotka and Turku.

Following some unexpectedly favourable winds conditions during Race 2 of the Tall Ships Races 2017, the Tall Ships fleet arrived in Klaipeda ahead of schedule. But with preparations well in hand, the bustling Lithuanian city was delighted to welcome the ships with open arms.

In a change from the other port celebrations of 2017, the people of Klaipeda were treated to two crew parades – the traditional Tall Ships crew parade and a second to celebrate the annual Klaipeda Sea Festival that had coincided with the fleet’s visit. 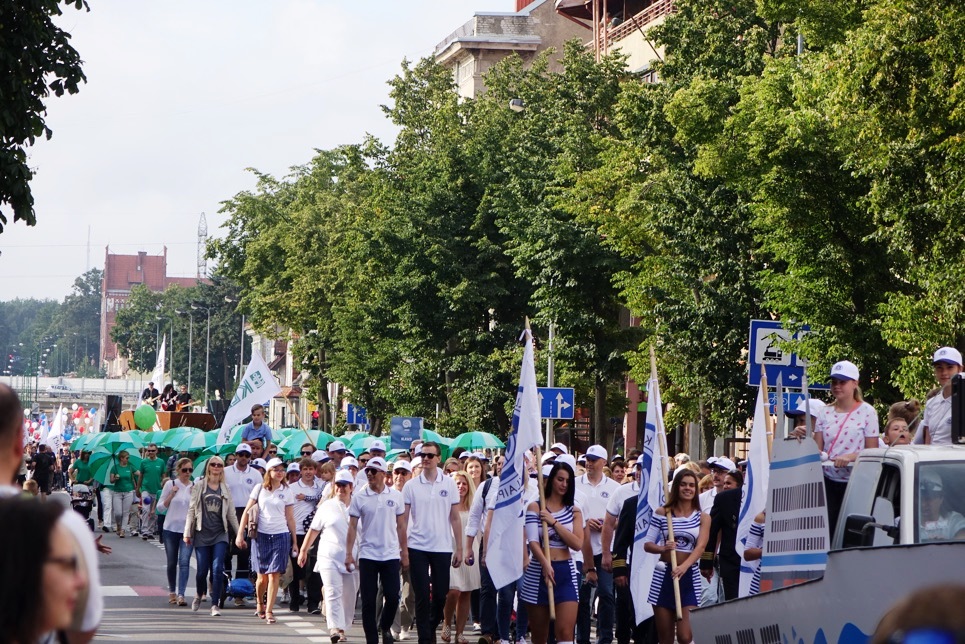 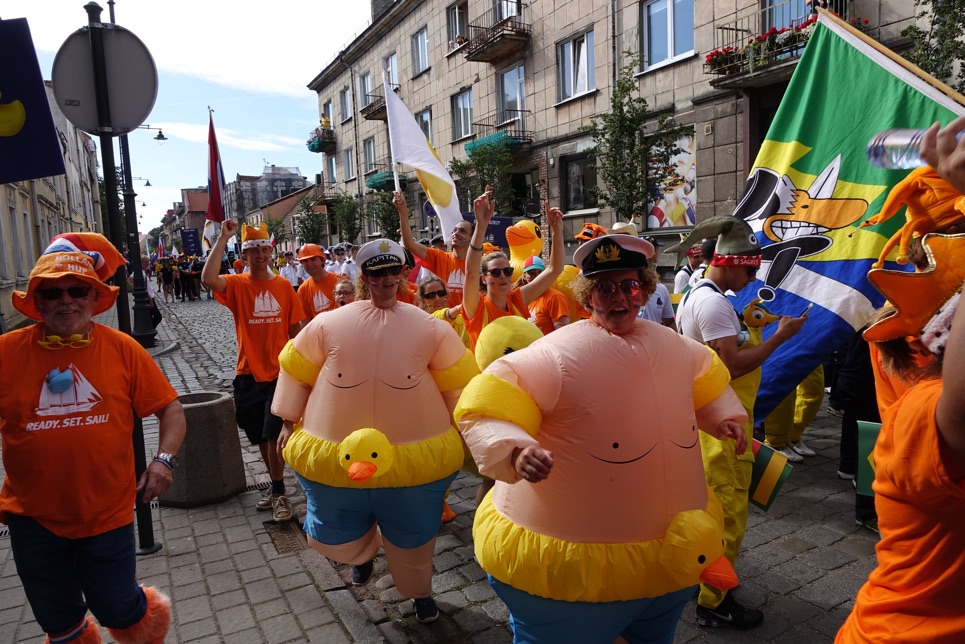 The Tall Ships Crew Parade in Klaipeda was a kaleidoscope of colour.

In attendance for the Opening Ceremony in Klaipeda was a very special guest… The President of Lithuania, Dalia Grybauskaitė. Speaking to the crowds of spectators and crews, she welcomed the large international fleet of Tall Ships to Klaipeda and the Baltic region. Following her speech, she toured the Brazilian Tall Ship, Cisne Branco and Omani Tall Ship, Shabab Oman II.

Following three days of maritime festivities and celebrations, it was time for the Tall ships Parade out of Klaipeda and the start of the final race of this year’s series. Check out the highlights from the race start in the video below.

Szczecin, Poland, opened the final celebrations of the Tall Ships Race 2017 in magnificent style on 5 August.

With the final race finished, and the competing crews in the fleet eager to find out the results of the 2017 race series, Race Chairman, Knut Western, took a moment in his Opening Ceremony speech to highlight the real focus of this years event.

“The most important prize in the Tall Ships Races is not for winning the race, it is the Friendship Trophy, which is given to the crew which in the opinion of all the captains, contributed most to the ideal of international understanding and friendship.

“At least 50 per cent of the crews on each ship must be aged between 15 and 25, and they come from every corner of the world, regardless of their national, cultural, religious, social or personal background. And that is what sail training is about: to develop young people in these surroundings.”

Taking home the coveted prize were the crew of the Omani Tall Ship, Shabab Oman II. The award was announced at the final prize giving ceremony, and a special presentation was made on board the vessel on the final day of celebrations. 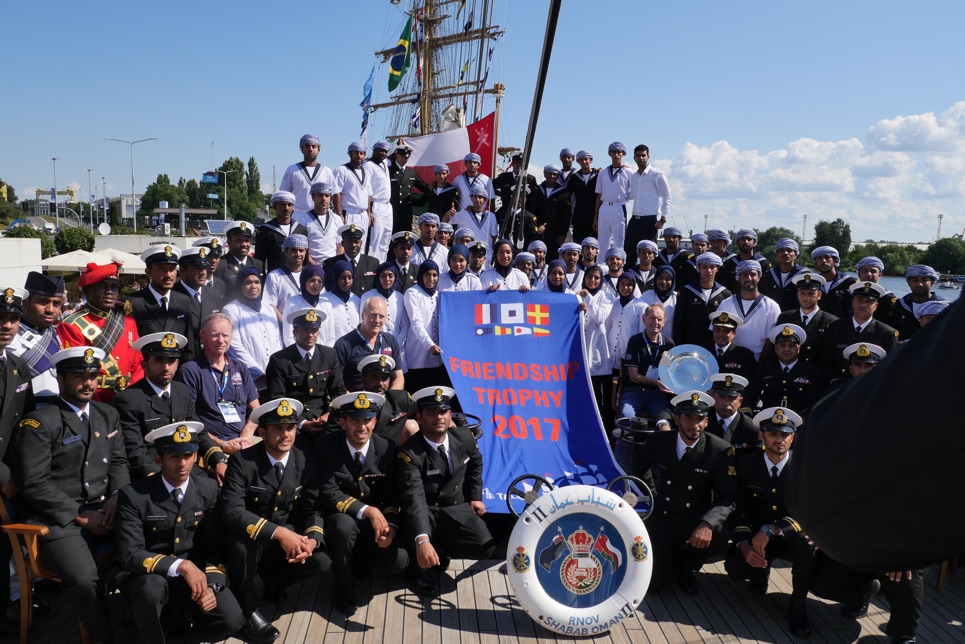 The crew of Shabab Oman II are presented with the Friendship Trophy in Szczecin.

No matter who you are, there’s an adventure out there with your name on it. Some vessels welcome trainees with special needs, while others provide exciting opportunities for unemployed or underprivileged young people.

Just head over to our Adventures page to find out about all the opportunities available throughout the year and around the world … and remember … no experience necessary!